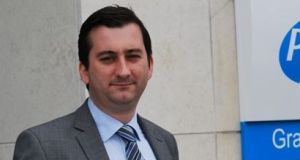 A former adviser to Tánaiste Frances Fitzgerald has publicly declared for Leo Varadkar in the Fine Gael leadership campaign.

William Lavelle, a councillor for the party in Lucan, confirmed he would be supporting the Minister for Social Protection in the upcoming contest.

Mr Lavelle said: “I have known Leo for 17 years. I believe he has the vision, capacity and personality to be a great taoiseach and to do great things for our country.

“I spent four hours out canvassing in Lucan on Saturday, and at every second door people wanted to talk about the Fine Gael leadership contest.

“When asked who I’d be backing, I had no problems expressing support for Leo.”

Mr Lavelle worked as an adviser to the Tánaiste until earlier this year. He is now a full-time councillor.

Taoiseach Enda Kenny is to confirm his departure date at this week’s parliamentary party meeting.

Many expect him to stand aside at that point and facilitate a leadership contest.

However, Mr Kenny has a trip to New York, Seattle and Chicago scheduled from June 4th to June 9th.

The contest to succeed Mr Kenny will run for roughly three weeks. If he announces his intentions next Wednesday, May 17th, the vote would conclude on June 6th.

Mr Kenny would not be present on that date if he fulfils the commitments made.

Whenever the contest begins, there will be three days for contenders to gather the required eight signatures to enter it.

Four party hustings will take place around the country, likely to be in Dublin, Cork, the midlands and the west the following week.

Members and councillors will be the first to vote, with the parliamentary party last to cast their ballot.

The Fine Gael leadership will be decided by an electoral college which gives the parliamentary party – TDs, Senators and MEPs – 65 per cent of the vote. Rank-and-file members are allocated 25 per cent and councillors 10 per cent.