Creating a ‘bespoke’ CIA or MI6 for Ireland could cause complications 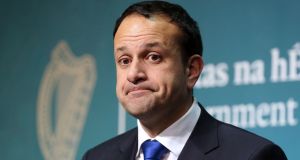 Taoiseach Leo Varadkar said he was concerned when he learned that even after Minister for Justice Charlie Flanagan directed that “one of the famous emails” be sent to the tribunal, the department “still sought legal advice on whether it was covered by the terms of reference of the tribunal.” Photograph: Laura Hutton/PA Wire

Major complications could arise if Ireland tries to create a “bespoke” security agency similar to the CIA or MI6, Taoiseach Leo Varadkar has warned.

He said the Commission on Future Policing could examine whether Ireland should create such an agency, separating it out from the policing role of An Garda Síochána.

But he said in the Dáil “while it initially appears to be a great idea to have an agency similar to those in other countries, whether MI6, the CIA or similar agencies in smaller countries, when you think it through you see the complications that would arise”.

Labour leader Brendan Howlin highlighted the need for a “bespoke security agency which would separate security considerations from An Garda Síochána, leaving the Garda as a policing organisation”.

He said that a security agency would have responsibility for all elements of security along with military intelligence, the national cyberneticist agency” and other related organisations.

Mr Varadkar told Mr Howlin that while Ireland is a small State with much lower security risks than other countries, “creating a whole new agency and disentangling it from the Garda and Defence Forces would be complicated.

“And our national security could be compromised during the transition phase which could last for years and be very expensive.”

The Taoiseach added however “I have an open mind on the issue and I am interested in hearing views on it and seeing what the Commission on the Future of Policing recommends”.

Mr Varadkar also later apologised for having inadvertently misinformed the Dáil in relation to the Garda whistleblower emails controversy in the Department of Justice.

He had said that the department was informed about the legal strategy of the then garda commissioner to challenge Sgt Maurice McCabe at the O’Higgins commission after the cross-examination had taken place.

In the Dáil on Wednesday Mr Varadkar said “I conveyed information to the House in good faith and used the phrase ‘cross-examination’ as it was contained in the briefing note I had been given by the Department of Justice to assist me in giving my answers.

“However this was an error and the note should have referred to ‘exchanges between counsel’ which I understand happened during the opening statements of the commission.

“There is no question of my having deliberately misinformed the House. However I apologise for inadvertently doing so.”

Labour TD Alan Kelly who raised the issue thanked the Taoiseach for correcting the record, but complained that there had been no change in the way parliamentary questions were being answered despite a pledge to do so.

Mr Kelly who had asked a series of questions about emails in the department that led to the political crisis, said he was now “getting far more text but I am not getting any answers in relation to facts”.

He called for the Department to “provide everything” to the Charleton disclosures tribunal and claimed that “information on the specific issues I have raised has not been sent down” to the tribunal.

The Taoiseach agreed the department “should err on the side of sending too much when it comes to documentation”.

He said if officials were wondering if documentation they have is covered by the terms of reference of the tribunal “they should assume that it is”.

Mr Varadkar said he was concerned when he learned that even after Minister for Justice Charlie Flanagan directed that “one of the famous emails” be sent to the tribunal, the department “still sought legal advice on whether it was covered by the terms of reference of the tribunal. It should have just been sent down straight away.”