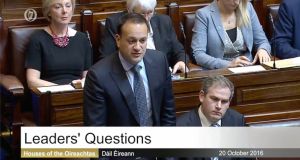 Taoiseach said he had maintained a “studied silence’’ on Monday

Taoiseach Leo Varadkar has said he absolutely accepts the British prime minister wants an agreement on the post-Brexit Border and was acting in good faith.

He said he understood Theresa May had difficult issues to manage. There were differing views within her own party and she had to manage a confidence-and-supply arrangement with the DUP, he added.

“It is the role of the United Kingdom to come back to us,’’ he added.

Speaking in the Dáil on Wednesday, before his telephone conversation with the prime minister, he said he wanted to restate it was the Government’s desire, wish and ambition to move on to phase two of the talks.

But if it was not possible to move to it next week, it could be done in the New Year.

Mr Varadkar said he thought it appropriate that all parties, North and South, should see the text of any agreement on a Brexit Border at the same time.

“I think we should listen to all parties in Northern Ireland and not accept this idea, that seems to be getting prevalence in some parts of London, and maybe other places as well, that there is only one party in Northern Ireland speaking for everyone,’’ he added.

Mr Varadkar said the situation was still evolving and it would be unwise and undiplomatic of him to answer questions fully.

He said he had maintained a “studied silence’’ on Monday when the deal collapsed following the intervention of the DUP.

A press conference had been postponed, and he had only spoken that evening when things had gone awry in Brussels.

He said it was important to advise the House that it was a structured negotiation.

“We are not negotiating with a political party in the North, in Britain or anywhere else,’’ he added.

“This is how this will be concluded,’’ he said.

The Taoiseach was replying to Green Party leader Eamon Ryan who said he had been involved with Arlene Foster and Nigel Dodds, of the DUP, in negotiating the creation of an all-island electricity market.

“We got the market over the line by saying nothing in public, by building trust and by doing the work behind the scenes,’’ Mr Ryan said.

“Does the Taoiseach regret we were not slightly quieter and that we did not say less on Monday?’’

Mr Varadkar recalled he had spent an entire day in Enniskillen last month, visiting the local hospital, speaking at the British Royal Legion and having a bilateral meeting with Ms Foster, where all matters were discussed.

The Taoiseach quoted from a speech made in the House of Commons by Northern Ireland MP Lady Sylvia Hermon when she said the DUP did not speak for, or represent, all of the people in the north.

Mr Ryan said at some point Mr Varadkar would have to pick up the telephone and talk to Ms Foster.

“In recent days, she seemed to indicate that the DUP had been comploetely outside the loop for five weeks and did not know what the text or structure was,’’ he said.