Alcohol Bill to be reintroduced after Halloween break

Leo Varadkar confirms his ‘absolute commitment’ to the controversial legislation 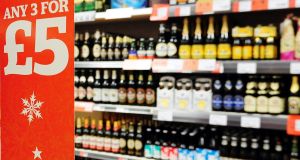 The long-stalled Public Health (Alcohol) Bill, 2015, will be reintroduced in the Seanad when the House resumes after the Halloween break, the Taoiseach has confirmed. File photograph: Rui Vieira/PA Wire

The long-stalled Public Health (Alcohol) Bill, 2015, will be reintroduced in the Seanad when the House resumes after the Halloween break, the Taoiseach has confirmed.

Leo Varadkar told the Dáil on Wednesday the Bill would be in the Upper House on November 8th, as concerns were raised about the delay in bringing the controversial legislation through the Oireachtas.

The Taoiseach assured Sinn Féin leader Gerry Adams of his “absolute commitment to this legislation, which I published as minister for health”.

Mr Adams noted that former Fine Gael senators and advisers were lobbying against the legislation.

“The alcohol industry should have no role in formulating national alcohol policy,” he said.

Mr Varadkar told him that “this is a free country and people are free to lobby their local Teachtaí Dála and Ministers as they wish.

“But I absolutely guarantee the Deputy that no one has changed my mind on this. The legislation will be reintroduced to the Seanad on November 8th.”

The Bill would end below-cost selling through minimum unit pricing; place restrictions on alcohol advertising and sponsorship; provide for strict labelling on alcohol bottles and cans, and lead to the separation of alcohol products in retail outlets.

Mr Varadkar introduced and steered the Bill through its second stage in the Seanad in December 2015 before the last general election.

The current Government reintroduced it in the Seanad for one day in October 2016 for debate on Amendments, but this stalled after two hours of heated exchanges and filibustering.

Mr Adams said the legislation was “hugely important for the health of our society.

“Some 500 people die each year from alcohol-related cancers, there are three deaths every day due to alcohol and approximately 1,500 hospital beds are occupied as a result of alcohol-related illnesses.”

He said liver specialist and chair of the Alcohol Health Alliance Prof Frank Murray had warned of the enormous lobbying against the Bill by the alcohol industry.