Finance Minister Pascal Donohoe TD has said that most of the tracker mortgage customers who have already been identified as being affected by the scandal will receive compensation by the end of December. Video: Bryan O'Brien 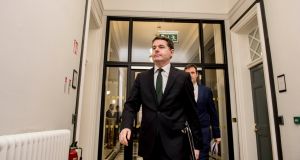 Minister for Finance Paschal Donohoe: on the warpath, with second World War fighter planes on his socks. Photograph: Brenda Fitzsimons

Remember that fella who stood up from his seat on the upper deck of the bus?

“I don’t know what a tracker mortgage is!” he exclaimed.

Because there are thousands of people in Ireland today who are very sorry they ever knew what a tracker mortgage was.

That famous line, gleefully repeated up and down the country when a funny quip was needed, was from a 2007 advert for the Financial Regulator.

It advised people with questions about their personal finances to log on to the regulator’s website, itsyourmoney.ie. When what they really required was somebody to set up an advisory site from the banks called “werobyourmoney.ie”.

The tracker scandal, where the banks duped people into making mortgage repayments on their homes for well over the agreed odds, was top of the agenda again in Leinster House on Wednesday. It was raised by Fianna Fáil in the Dáil on Wednesday night, with the party calling on the Government to take a number of specific actions to curb the gallop of the banks and to strengthen protections for customers.

There was a feeling all day that the House was marking time until this debate, which was scheduled to take place after the Minister for Finance’s lengthy press briefing in his department on the matter and his subsequent appearance on the Six One news.

Paschal Donohoe is very, very annoyed with the banks. He doesn’t care who knows it. He is so, so disgusted with their antics that he has demanded two more reports from the Central Bank to join all the other ones and he should be in a position to be very definitive about something one way or the other in about six months’ time.

In six months’ time, or thereabouts, he wants the investigators to “come back to me with an analysis of where we are now, not where we have been in the past”.

There is also “a really clear timeline”.

Inside Business on the tracker scandal

Because the banks have a really clear record (clearly abysmal) when it comes to meeting timelines and deadlines.

If anybody was in any doubt as to whether or not Paschal really means business, his intent was there for all to see in his socks.

They were sky blue and patterned with tiny second World War planes – the Minister’s fighting Fokkers. A very large contingent of civil servants watched him from the back of the room.

“I’m crystal clear as to where this issue needs to get to in the future,” he said, firmly.

However, he couldn’t be crystal clear with everyone else because that might prejudice the investigation work and give some people in the banks a bad attack of the legals. Despite repeated requests to be more specific about what actual sanctions he might impose should certain banks not heed this final warning, Donohoe refused to elaborate.

But there will be “targeted activist actions”. What does that even mean?

Another indication of this determination to finally crack down on the rampant nose-thumbers in the banking sector was evident in the backdrop to the top table.

We may have been in the Department of Finance, with the Minister for Finance doing all the talking, but the words behind Paschal read: “Government of Ireland”.

A top down, team effort, it seems.

Paschal, meanwhile, was pressing ahead with his new impression of Bruce Banner, the mild-mannered boffin who transforms into the Incredible Hulk when he’s riled up. Apparently he did it for the representatives of the various banks when they came for their admonishment.

“Don’t make me angry, thank you very much,” he will have told them. “You wouldn’t like me when I’m angry.”

What might he do to them? At the briefing, the best he could do was make cryptic comments about “other matters” which might be employed to punish the worst offenders. Like those times when the banks come to him seeking his consent on certain issues, which he usually gives. But he might not be as amenable if the reports he eventually gets back are not to his liking.

So it seems the Government is acting swiftly and decisively to get to the bottom of the tracker mortgage scandal and will do whatever has to be done to assuage the hurt done to so many people and sanction the entities responsible.

But scroll back to Leaders’ Questions at the very beginning of the day, when just one contributor raised the issue, with specific references to timelines and swift action.

Séamus Healy, the Independent TD for Tipperary, said he told then taoiseach Enda Kenny about the “tracker mortgage fraud” during Leaders’ Questions six months ago. He told him about “what has been appearing in the media over the last number of weeks”.

A quick perusal of the official record shows that this is what Séamus said to Enda: “Tracker mortgage fraud by the banks is a huge scandal which requires criminal investigation. These are the same banks that we, the public, bailed out to the tune of billions of euro . . . This has the potential to be a €500 million scandal. Mortgage holders have been overcharged to the tune of €20,000-€30,000.”

He referred to the Governor of the Central Bank saying there was “a systemic and widespread aspect” to the scandal before noting ,“this is likely to be only the tip of the iceberg.”

In April, Healy wanted the Government to take action on the banks, take steps to help the people and ask the then minister for justice to suggest getting the Garda fraud squad on the case.

The then taoiseach said he had noted the governor’s comments “including that consideration be given to follow through in regard to some of the activities that have gone on in this area”.

Then he said nobody wants to see people losing their homes. However, it wasn’t in his power to order criminal investigations.

On Wednesday, Healy recalled asking the then taoiseach to make a formal criminal complaint in April. It didn’t happen then, nor, despite the current outcry, has it happened now. He pressed Leo Varadkar on whether he, or the Central Bank, have made a formal complaint.

“I do not know whether or not a formal complaint has been made as yet . . . if the deputy believes a crime has been committed and has evidence to back it up he should make a complaint now, or if he hasn’t already he should have made it many months ago.”

That could apply to others too, Leo.

During Wednesday night’s debate, Fianna Fáil’s Niall Collins called the scandal “institutional theft on a grand scale with the government standing idly by”.

Ireland-Italy rugby match due to be called off over coronavirus risk 19:06
Could Ireland put towns under lockdown if coronavirus arrived? 19:00
EU issues ultimatum to London ahead of Brexit talks 18:54
Masks and hand gel sell out as coronavirus fears take hold 18:26
Murder accused ‘lay down’ with wife for 10 minutes after killing her 18:01