A woman’s place ‘is where she wants it to be’, Taoiseach says 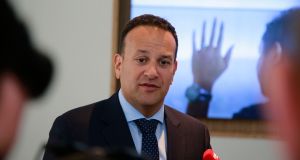 The Government has decided that the referendum on a woman’s place in the home will involve a straight deletion of the wording because it is too complicated to also consider the role of carers and family.

“I and the Government do not believe we should tie up a decision on deleting this sexist and anachronistic language from our Constitution with a debate on caring and families,” Taoiseach Leo Varadkar said.

He told Green party leader Eamon Ryan that “caring and families deserves consideration in its own right. We will do that in 2019 and if we can come up with wording that is agreeable, we will put that to the people as well.”

Article 40.2.1 states: “In particular, the State recognises that by her life within the home, woman gives to the State a support without which the common good cannot be achieved.

“The State shall, therefore, endeavour to ensure that mothers shall not be obliged by economic necessity to engage in labour to the neglect of their duties in the home.”

The Taoiseach said “a woman’s place is where she wants it to be and that is not necessarily in the home”.

Mr Ryan said nobody was disagreeing with that but “we should look at working that strengthens and provides cover for all sorts of gender neutral caring work”.

Minister for Justice Charlie Flanagan had said he would ask the Citizens’ Assembly to consider the issue of caring work and Mr Ryan asked for a timeline and wondered “how will be we engage in this debate on the role of caring in our society between now and October”.

The referendum is expected to be held in October along with one on blasphemy at the same time as the presidential election, should there be one.

The Dublin Bay South TD expressed concern that the issue was being rushed through and said it needed time and real thought. He believed it could be done next year, rather than this year.

The Taoiseach insisted, however, that “it is complicated” and asked if it referred to just family carers or included commercial carers.

Mr Varadkar added that “these are much bigger issues and they should not be tied in with deleting this sexist and anachronistic language from the Constitution.”

He said that deleting this language was long overdue “so let’s do that and look at the issues on the definition of the family and constitutional protections on caring and the people they care for” as separate items.