Government gets power to revoke planning permission for ‘State security’ 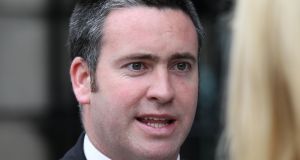 Minister of State Damian English: said the powers would not be abused. Photograph: Alan Betson

Planning permissions viewed as a threat to the State’s security or national interests can now be revoked after the Dáil voted to give the Government sweeping new powers.

Social Democrats TD Catherine Murphy described it as a “draconian measure” and said the only thing she could think it related to was the planning permission granted in 2015 to the Russian embassy.

The embassy was granted permission to more than quadruple the size of its premises, but came under scrutiny in the controversies over electronic surveillance and the poisoning of a former Russian spy and his daughter in Salisbury, England with the subsequent expulsion of an embassy diplomat from Ireland in an international retaliatory action.

In response, Minister of State Damian English, who is steering the legislation through the Oireachtas, insisted “it is not for any particular reason or to target anything in particular”.

He said “there is no one target” but a gap in the law that meant that if something of that nature were identified “there is no way of dealing with it”.

He said he expected the powers “will not be abused”.

The amendment is one of more than 70 from the Seanad to the Planning and Development (Amendment) Bill which establishes a new planning regulator, gives statutory backing to the new National Planning Framework and gives effect to the recommendations of the Planning tribunal.

Independent TD Catherine Connolly said that in the wake of the tribunal, the key element and “entire function” of the Bill was to improve transparency in the planning process.

“But right in the middle of it there is section 44, one of the longest, which does away with transparency. It does away with accountability and gives draconian powers to various Ministers,” said Ms Connolly.

Under the provision the Government can, at the behest of the Minister for Foreign Affairs, the Minister for Justice or the Minister for Defence, revoke or modify a granted planning permission where it is viewed as “likely to be harmful to the security or defence of the State or the State’s relations with another state” and in the public interest.

Mr English said the power was likely to be invoked only “in very rare and extreme cases” but it should be available to the Government and Ministers to “take proportionate and justifiable action”, where the planning permission “is assessed to be a threat or unacceptable risk to the State”.

Sinn Féin housing spokesman Eoin O Broin said he had “grave reservations” about the provision. The safeguards for the affected “person or entity” included referring the matter to the courts “but they will be held in camera so there will be no public scrutiny but crucially documentation relating to the decision of the Minister and Cabinet could be withheld from the parties to that court case”.

He said it might be justifiable if it was only permissible where there was a threat or risk to the State, but it could “be used for all sorts of things” because the amendment was far broader than that and could “also relate to foreign policy issues, economic issues or other matters”.

Mr English said the provisions were seen as “reasonable and appropriate” and incorporated necessary checks and balances for affected parties.

The provision provoked almost an hour of debate in the Dáil before it was accepted by 45 votes to 21.

Fianna Fáil voted with Fine Gael to support the provision. Sinn Féin, the Social Democrats and a number of Independents voted against.