Unions say staffing levels are unsafe with about 2,800 vacancies in nursing 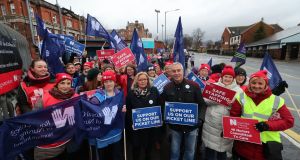 Not one of the several hundred people on the picket line in the driving wind and rain at Altnagelvin Hospital in Derry wanted to be there, but each of them felt they had no choice.

The members of the Royal College of Nursing (RCN), Unison, Unite and NIPSA taking turns were some of the 20,000 nurses, paramedics and healthcare workers from across Northern Ireland on strike over pay and staffing levels.

At the ambulance station inside the hospital, paramedics manned their own picket line; they must stay by their vehicles to ensure that even during a strike, emergency cover is maintained.

“I’ve been in the health service 30 years and I’ve never seen it as bad,” said paramedic Michael McConnell.

“Staffing levels are terrible, morale’s terrible,” he added. “None of us want to be standing here, but we know that unless this is brought to a head and the public see how bad it is it’ll just keep getting worse.

“There are times we’re standing in casualty waiting to unload our patients on to a bed, so that means that’s an ambulance not available for up to an hour, sometimes longer, because we can’t get a patient offloaded from our stretcher.

“A&E staff are burned out, I’ve never seen staff so demoralised as I have these last two years. It’s not fair, they’re the same as us, they want to do their best for their patients and they can’t, it’s heartbreaking.”

On the picket line, patient welfare was at the forefront of everyone’s mind. Many would head back inside the hospital when their shifts were over in order to relieve colleagues and to make sure that, strike or no strike, their patients were looked after.

“You’re standing in the rain at this time of day when you know you could be doing your job,” said nurse Carmel Dillon. “You’re torn between your work and this, but I believe something has to be done for patient safety and nurses’ wellbeing and their mental health.”

The number of vacancies are such, the unions say, that staffing levels are simply unsafe; according to the RCN, there are about 2,800 vacant posts in nursing alone.

This means, says Ms Dillon, “you’re very stressed. You just feel as if you’re not giving 100 per cent to your patient, and you’re trying to do your best but you feel as if you’re failing both the patient and yourself.”

“There’s overuse of agency nurses because a lot of our own staff are stressed out, some are on long-term sick leave and they’re struggling even to pay bills,” explains Alan Philson, a nurse and branch secretary with Unison.

“We get paid monthly, but your monthly wages might last two or three weeks. We’re sending the likes of nursing assistants and nursing support staff to the food bank.”

Yet these pressures are coming at a time when waiting lists are increasing. According to the latest figures, which were published by the Department of Health in November, 306,180 people were waiting for a first consultant-led outpatient appointment as of September 30th.

As a devolved matter, health should – in theory – be dealt with by the Assembly. The reality is that Stormont has been mothballed for almost three years; it collapsed in January 2017 following a scandal over a renewable heating scheme, and its continued absence means no minister for health, and therefore nobody to make the key decisions.

The senior civil servant in charge in the minister’s absence has tabled pay offers, which were rejected by the unions as falling short of what they had asked for; “in the absence of ministers,” Richard Pengelly said, “this is the furthest I am able to go.”

Health is a key issue on the agenda at the talks aimed at restoring the Stormont government; the Secretary of State has stressed it is up to the North’s political parties to do a deal and get back into government to sort it out.

Judging by the number of car horns blaring their support for the striking workers, the public agree; on the picket line, so does Santa. “All I want for Christmas is all this sorted out, Stormont up and running again, and pay parity and safe staffing levels at all times.”