State Papers 1989: ‘More work to be done here, I fear’ is verdict after trip to UDR base 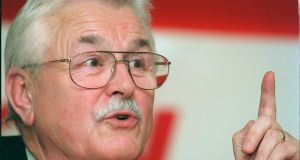 A Northern Ireland official remarked after visiting a Ulster Defence Regiment base in 1989 that the British government needed to do more to convince unionists that it was tackling terrorism.

The account is released in previously confidential files declassified at the Public Record Office in Belfast.

In a report for officials, Peter Bell of the Security Policy and Operations Division of the Northern Ireland Office described his visit to 4 UDR base in Enniskillen, Co Fermanagh, on December 14th, the same day that two soldiers were murdered by the IRA on the Fermanagh-Monaghan border.

‘In the shadow of yesterday’s murder at Derryadd, I attempted to justify the government’s security policy to the officers of 4 UDR,” he wrote.

His aim was to “reaffirm the British government’s total commitment to ending terrorism and the importance of continued security force attrition in achieving this goal . . . I also emphasised the need to enhance confidence in the security forces throughout the community and why terrorism should be eradicated under the rule of law.”

He added wryly: ‘More work to be done here, I fear.’

as a whole, “down in Co Fermanagh, the Battalion (and the Protestant community they represent) are less sanguine. They see members of the security forces having to live further and further away from the Border ... They see too much of their effort consumed in self-protection and, in general, see PIRA [Provisional Irish Republican Army] as having seized the military initiative. There was the usual mock nonsense about sealing the Border, putting politics into deep freeze until the IRA had been taken out . . . But more striking to me was the pessimism which is only too faithfully reflected by the local MP [Ken Maginnis of the Ulster Unionist Party] . . . There the county and Border are what matters.’”

Bell continued: “One could not resist the impression that [among them] there was a struggle for the county. (The point was made several times that the population there was 50:50) and they believed that in their home ground the enemy is winning.”

Community in arms He noted that in Fermanagh,

3 per cent of the Protestant population was in the UDR. This represented, he noted, “a significant chunk of the population of all social classes [which] is a UDR family for a variety of reasons from patriotism, on the one hand, to a useful supplementing income for a small farmer, on the other. In one sense, I was addressing the leaders of the Protestant community in arms . . .”

However, he concluded: “There was far too much emotion around for anything approaching a cool discussion of this and related topics.”

‘I have no faith in the Catholic Church but I prayed when I’d Covid-19’ 11:30
Three arrests as 8 million illegal cigarettes seized 08:20
Ireland enjoys hottest day of the year for second time this week 19:32
Coronavirus: Nine more deaths reported in the Republic 18:47
Two men held over raid on Cork bookmakers foiled by pensioner 16:42