No migration from Italy to Ireland under EU scheme 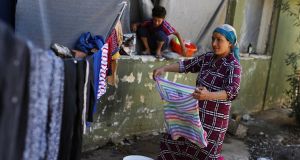 A Syrian Kurdish woman hangs out washing at Ritsona refugee camp north of Athens, which hosts about 600 refugees and migrants. The EU’s border agency says the number of migrants arriving in the Greek islands has increased significantly over the past month. Photograph: Petros Giannakouris/AP

Differences between Irish and Italian authorities over the handling of asylum seekers’ applications for relocation have resulted in no migrants moving from Italy to Ireland under an EU scheme agreed last year.

The Department of Justice said “technical issues” meant no asylum seekers had been relocated from Italy since the scheme was agreed in September 2015. It is understood Irish authorities want a greater role in the assessment of asylum seekers on the ground in Italy before they are cleared for travel to Ireland.

The Government agreed to accept 2,600 asylum seekers under the initiative, which was designed to ease pressure on Greece and Italy by dispersing new arrivals across European states.

A further 15 out of 32 participating states have also received no migrants from Italy under the programme.

The scheme, which was to provide for the relocation of 160,000 asylum seekers from Greece and Italy, has been beset by delays and low take-up rates. As of last week, just 4,947 people had been transferred to other European states, with France having accommodated the largest number (1,656) and a number of states, including Austria, Hungary and Poland, having received none.

In July, the European commissioner for migration, Dimitris Avramopoulos, sent a letter to EU ministers for justice imploring them to relocate more people. Critics have argued that even the 160,000 figure is inadequate, given that more than a million refugees and migrants arrived in the EU by land and sea last year, making it the worst crisis of forced displacement on the continent since the second World War.

Syrians account for the great majority of relocation applicants, but Eritreans are also eligible, as are citizens of a number of countries with low rates of arrival in Europe.

A spokesman for the Department of Justice said relocation was “a complex and sensitive process” which had never been attempted on such a scale.

“In addition to the logistical challenges, human rights and security considerations must be taken into account,” he said. “Progress has been slow so far as a result of issues on the ground in Greece and Italy, which we are actively supporting those countries to resolve.”

The spokesman said these issues included the “assessment and clearance procedures” for the transfer of asylum seekers to Ireland.

Asylum seekers who are due for relocation are first registered at designated “hotspots” in Greece and Italy, where officials check that they meet certain eligibility requirements.

In Ireland’s case, officials from the Office of the Refugee Applications Commissioner take part in this initial assessment.

On arrival in Ireland, they have their applications for refugee status fast-tracked.

Government officials say Ireland stands ready to take more people for relocation and they are frustrated by delays in the process.

The Department of Justice said yesterday that following discussions with Greek authorities, it hoped to begin taking in 60-80 people a month “very shortly”. Officials would “continue to engage” with Italian authorities, the spokesman added.

In addition to the relocation scheme, Ireland has admitted 377 out of a total of 520 people it pledged to take in 2016 under a separate resettlement scheme run by UNHCR, the UN refugee agency. This long-standing programme, which involves people who are certified as refugees while in Lebanon, Jordan and elsewhere, has been the route to Ireland for most of the 1,000 Syrian refugees who have come here since the outbreak of the Syrian civil war in 2011.

The United States, which has taken in 53,804 people, has received the highest number of Syrian refugees under UNHCR schemes since the outbreak of the war, followed by Canada (48,089) and Germany (43,119).

Overall, the places pledged for resettlement fall far short of the need. The UNHCR projects the number of people in need of resettlement next year will pass 1.19 million – a 72 per cent increase on the projected needs for 2014, before large-scale resettlement of Syrians began.

1 Two hundred Irish retailers for all your online Christmas shopping
2 Father unaware partner and baby dead until gardaí called to raise alarm
3 Anatomy of a lockdown U-turn: Holding out against Nphet a gamble politicians unwilling to take
4 Man who loses bag with €40,000 of cocaine rings gardaí to report it missing
5 Dropping Covid-19 positivity rates give grounds for hope, says HSE boss
Real news has value SUBSCRIBE