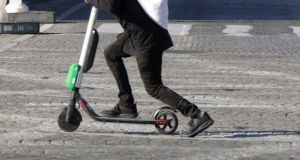 The numbers of these types of vehicles have increased sharply in Dublin in the past year. File photograph: Charles Platiau/Reuters

The Road Safety Authority (RSA) is to carry out research into how electric powered scooters are regulated in other countries following a sharp increase in their use in Ireland.

Minister for Transport Shane Ross said in a reply to a parliamentary question last week his department was aware of their growing use, particularly in Dublin, and said he wanted to see how such vehicles (classified as mechanically propelled vehicles in the Road Traffic Acts) are dealt with in other countries, particularly other EU member states.

“I am keen to understand the road safety implications of the use of such vehicles on public roads, especially when interacting with other vehicles,” he said.

The scooters look like a larger version of a child’s scooter, with two small wheels and a platform on which the driver stands, and are powered by a battery.

Similarly there are skateboards powered by electric motors. There are also a few electric unicycles on the roads: these are one wheeled vehicles where the driver places each foot on a foothold on either side of the wheel.

The numbers of these types of vehicles have increased sharply in Dublin in the past year but as of now this new form of transport is not regulated.

Most of the scooters are powered by rechargeable electric motors and are programmed not to exceed speeds of 26km/h. Most avoid a designation of a mechanically-propelled vehicle because they require a kick-off to start.

This puts them in the same category as bicycles and electric bicycles and means they do not require insurance or a licence to operate on public roads.

Prices start at about €400 for the electric scooter with some retailing at €1,200. They typically have a range of 20km to 40km on a charge and travel at speeds up to 30km/h.

The matter has posed a challenge in a number of European cities, particularly in Paris, where two scooter-sharing companies, Lime and Bird, put hundreds of eScooters on the streets of the French capital last year.

In response the French government plans to introduce a ban on the scooters from being used on paths and pavements, and to restrict them to bike lanes or roads. A new category to cover this form of transport has also been proposed.

However, as recently as Christmas electric scooters were not viewed as an issue by the department or the RSA.

In December, The Irish Times submitted a Freedom of Information request to both the RSA and the department seeking records on any discussions or correspondence in relation to electric scooters, electric skateboards, unicycles, and bicycles with electric or petrol-powered drives.

The RSA and the department responded that they had no records, indicating the issue had not been considered by either body.