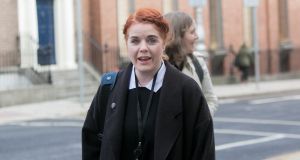 The future of TD Neasa Hourigan within the Green Party is in the balance after she voted on Thursday against the Government on a new Bill dealing with tenants’ rights.

Ms Hourigan then resigned her position as Green Party whip, but said she wished to remain within the parliamentary party, adding that she had raised concerns about the legislation in a party meeting earlier this week.

In a statement Ms Hourigan said she voted the way she did “because I hold significant concerns as to the impact of the Government legislation on people living in precarious tenancies”.

She said the legislation does “not offer enough protection for renters on eviction due to sale, [which is] recognised as a driver of homelessness, nor does it sufficiently recognise the risks posed by the rent arrears accrued during the pandemic.

“While I accept that this stance may lead to negative repercussions for me personally, I wish to remain an active member of this Government and a Green Party parliamentarian.”

A Government Minister said the decision by Mr O’Brien to abstain was the most serious issue. The Minister, who spoke on a background basis, said the move was “disappointing at such an early stage. This was a Bill which, while not perfect, gave further protection to people renting during the pandemic.”

The controversy marks the end of a difficult first month of Government for Fianna Fáil, Fine Gael and the Green Party. The Dáil is now due to go into recess for six weeks despite calls from Sinn Féin for a special sitting next week to discuss concerns in relation to airport checks on PUP recipients.