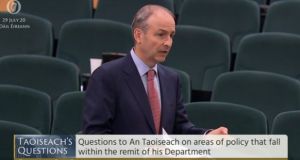 Each of the three Government parties has had an eventful time since the election on February 8th, and arguably none more than the Greens.

In the wake of the election two ideological camps emerged in the party and they conducted an intensive – and at times bitter – debate about going into Government with the two parties that epitomise the establishment.

It played out in the vote on Government, in allegations of bullying on social media, and in a leadership contest that was decided by a hair’s breadth. In the way these things are given shorthand, party leader Eamon Ryan and deputy leader Catherine Martin came to personify both sides. And then there was a breakaway, with the formation of a new ginger group called Just Transition that is kind of semi-detached from the party.

There were hopes that after all that things would settle down for a while and the Government could go about its business.

However, the tranquillity was strictly temporary and was shattered by two of the 12 Green Party TDs going overboard on Thursday on a Bill designed to extend the protections for tenants who have lost their jobs or income during the Covid-19 pandemic.

The party’s whip Neasa Hourigan – who had been opposed to the party entering coalition with Fine Gael and Fianna Fáil – voted against the Government on four amendments and the overall Bill.

But there was a sting in the tail. One of the Dublin Central TD’s colleagues, Joe O’Brien, abstained in the vote on the substantive Bill.

Although he did not vote against it, O’Brien’s decision was seen as the more serious. He is Minister of State for Community Development and Charities and a member of the Government.

This was not a private member’s Bill, but a Government Bill, and while not a member of Cabinet, there would be an expectation that O’Brien would have signed up to collective Cabinet responsibility. There was an issue in the last Dáil with Independent Alliance ministers abstaining on Bills, but such abstentions were on private member’s Bills, not on legislation being sponsored by the Government.

A Minister from one of the other parties said that this was a relatively benign Bill in the context of some of the really difficult decisions that will have to be taken in the autumn. The Minister said it did not give much confidence on the longevity of the Government, if its TDs were peeling off at such an early stage.

So what happens now? Nobody in the Greens was in a position to say if the party has a formal disciplinary process, or sanction regime. In New Zealand, members of the Green Party there have an agreement in relation to voting against the government on non-programme issues. But no such arrangement exists here. There is an expectation that TDs support the Government in votes on every occasion.

Green Party people were at sixes and sevens on Thursday night. There was no official response from the party. Some were not aware of what was going to happen. The party has a “conscience clause” that allows representatives to abstain, but there was uncertainty about whether it applied in this case. Besides, such concerns have to be flagged with the party’s executive council. Fianna Fáil and Fine Gael said the matter is up to the Greens. There will probably be a meeting of the three governing party leaders to discuss the issue and what to do.

“What’s going to happen when the really hard stuff arrives, the stuff none of us want to vote for?” said a Fine Gael TD. “If this is what it’s like so early, how can the Government survive its full term?”