Irexit conference: ‘I am hoping something comes of this’ 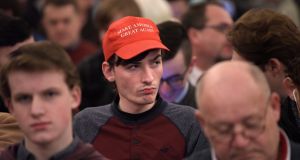 Luke O’Connor applauded and cheered with gusto and occasionally leapt to his feet during speeches at the Irexit conference for those opposed to Ireland’s membership of the European Union.

The 21-year-old Kilkenny student warmed to the praise lavished by former Ukip leader Nigel Farage on US president Donald Trump and the Brexit-like political earthquake he unleashed in 2016.

O’Connor wore a Trump-campaign “Make America Great Again” red baseball cap to the Saturday conference at the RDS in Dublin.

“I honestly get a great reaction. I would wear it on nights out,” he told The Irish Times.

I am hoping something comes of this, if not a party that we can get candidates to run in the European elections, that we even have a voice

The DCU student was typical of most attendees at the event, organised by Hermann Kelly, spokesman for the Ukip-led Europe of Freedom and Direct Democracy group in the EU Parliament. O’Connor is young, male and felt like his was a voice not heard in Irish politics or the media.

He explained that he comes at politics from “a different perspective”, that he was “very much at home” with the economic nationalism espoused by former Trump strategist Steve Bannon.

Describing the EU as “an affront to democracy” with “unelected bureaucrats”, he hopes the Irexit conference will at least allow people to start a conversation.

“I am hoping something comes of this, if not a party that we can get candidates to run in the European elections, that we even have a voice,” he said.

During the lunchtime break, Sarah Louise Mulligan (35), a student from Glasnevin, Dublin, approached O’Connor in the RDS to admire his cap.

She explained that she came to the conference because she is a “really big fan of Nigel Farage” and believes Ireland should take “a few leaves out of Donald Trump’s book”.

Ireland needs to follow them and become independent, she says. She also attended because she felt there should be less bias in the media and more balance in political debate to represent anti-EU views.

“We are standing on our own two feet now. We don’t really need any EU help any more,” she said.

We are a net contributor. We don’t get anything back from the union. It costs us money to stay in

Maggie Dunne (73), a care assistant, and her daughter Samantha (47), who works for a pest control company, saw the conference advertised on Facebook and drove from their homes in Fermoy, Co Cork.

They see enough support for an Irexit party in Ireland, particularly given that the Irish public are paying more into the EU than the country is getting out.

“We are a net contributor. We don’t get anything back from the union. It costs us money to stay in.”

Bruno Canning (41), a lone protester at the conference, interrupted an interview which writer John Waters was having with Farage. He held up a blue EU flag and whistled the EU anthem Ode to Joy.

He was escorted out of the hall, accompanied by angry jeers. He even had his flag confiscated.

Standing outside the gates of the RDS, the computer science student explained that he had travelled from Kent in England to protest at the voices inside the conference and the loss of his right to live, work, study and retire anywhere in Europe post-Brexit.

Do you have to agree with everything before you come to these things? Is that the way it is in Ireland now?

Inside, Aine O’Connell, a teacher from Charleville in Co Cork, asked the panel – with just one female participant – why the event was “very male-dominated”. “Would that be a problem going forward?” she asked.

One delegate asked all the women at the conference to stand up; they were in a small minority.

O’Connell told The Irish Times she had come as an observer to educate herself and to see if she was interested in the idea of Irexit. She felt there needs to be a discussion about leaving the EU “without labelling people”.

“It is not going to be discussed because you are afraid that you are going to be labelled a bigot if you so much as bring up the topic.”

She had also noticed few women at the event and that this had generated negative comments on social media, based on photographs posted of the attendees at the event.

“I wondered why: why they don’t feel they come here and ask questions as well?” she said. “Do you have to agree with everything before you come to these things? Is that the way it is in Ireland now?”