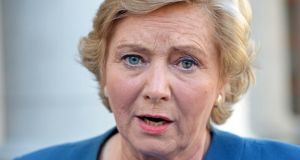 Micheál may yet take Frances to appease the gods of Fianna Fáil. Photograph: The Irish Times

Fear stalks the land. The Zombie Apocalypse has reached Leinster House. Only Leo can save us now.

“If they get Frances Fitzgerald, they’ll come looking for Charlie Flanagan next,” wailed Government TDs yesterday, trembling in their winter-ready election boots. Confusion reigns. Live blogs are launched. Chaos came from nowhere and engulfed the country this week. Three days of escalating macho posturing and we risk losing our Government just as Brexit negotiations are coming to the boil.

People are shocked, disgusted and bewildered, forced to contemplate the horror of a Christmas general election. Dead-eyed politicians circle the plinth, picking over the carcass of the New Politics. It’s a sobering sight. Will nobody think of poor Baby Brexit? There is bloodthirsty talk of heads on plates. Throwing bodies under buses. The media has gone into a feeding frenzy. Sharknadáil!

Government ministers appeal for calm. Senior Fianna Fáilers appeal for calm. An incandescent Michael Ring rages across the airwaves and mild-mannered Stephen Donnelly accuses him of perpetrating “a hysterical attack”. Regina Doherty begs deranged followers of Micheál Martin to “step back from the precipice”. But their blood is already up and they’ve lost the plot entirely. Regina has lost her senses too. When reminded how Fine Gael showed little mercy to former minister for justice Alan Shatter in his time of need, she dottily coos to interviewer Sean O’Rourke: “Aaaah, God love poor Alan.”

Can nobody stop this madness? Everything and everyone is “on the brink”. Bluffs are being called right, left and centre. Paschal Donohoe roams abroad, dark-eyed, brooding and spitting fire. “I am so, so, so angry, thank you very much,” hisses the Minister for Finance as he wantonly tears flesh from the limbs of Fianna Fáil.

The mood darkens considerably in the early afternoon with a chilling message from Brendan Howlin. “Labour is on an Election Footing!” Oh, dear God. Fianna Fáil and Fine Gael “will feel the wrath of the public” if voters are forced to the polls, warns Richard Boyd-Barrett of People Before Profit. Micheál Martin breaks cover and goes on the radio. He implores Leo not to ignore his telephone calls. There is still time to save the day. They need to talk. Baby Brexit will not be harmed. Just one sacrifice will do. Micheál will take Frances to appease the gods of Fianna Fáil.

All day, the shivering men of the Independent Alliance have been hiding out in a bunker. By mid-afternoon, under siege from frenzied journalists, they bravely stride onto the plinth to plead for their Dáil seats and an end to the senseless conflict. What a galvanising sight they are too. Boutros Boutros Halligan, the Dalai Moran, Mahatma McGrath, Kofi Canney and Winston Churchtown urge the warring zombie tribes of Varadkar and Martin to “swallow their pride” and “pull back from the brink” and not trigger the nuclear option of a Christmas run to the country.

Varadkar, who has not been seen in public all day, holds a secret meeting with the Fianna Fáil leader. The temperature outside plummets. The Met office issues snow and ice warnings. As the zombies return to their frozen constituencies, the two men agree to meet again. And again, if needs be.

Then it emerges that the controversial email sent to Frances Fitzgerald in 2015, the one alerting her to the Garda commissioner’s legal strategy to undermine whistleblower Maurice McCabe and which she forgot about, was also sent to her key advisors in Justice and the secretary general of the department. Which is awkward.

Finally, after darkness falls, the Taoiseach appears on the Six One news to take command and show leadership to the cowering masses. He does well, speaking the language that zombies understand. Leo will not sanction “the decapitation of the Tánaiste” or see “a good woman thrown under the bus” because nobody in the country wants to see “an execution without trial”.

He is impressive: reasoned and convincing, and even strikes a conciliatory note about Micheál Martin, whom he believes also doesn’t want a general election. But he will not forsake Frances. If the opposition forces a confidence vote against her then he will call an election before Christmas.

But he hopes it won’t come to that. Leo urges calm and promises there is still time to reverse the zombie apocalypse and save Baby Brexit. He won’t be asking Frances for her resignation. Some say she might just resign anyway, in the national interest.

“I really hope that doesn’t arise,” he says. “In the final analysis you have to do what you believe is right.” Which might be a hint. All is not yet lost. Tempers are cooling. This ridiculous zombie election might yet be averted.

Who’d want to be in Leo Varadkar’s shoes now?

As Leinster House was engulfed in crisis, and speculation about a shock general election mounted, guess what TDs were debating on Thursday night?

Deputies greeted the subject with nervous smiles. The government collapsed in 1982 after Independents rejected John Bruton’s proposal to put VAT on children’s shoes.

In the Finance Bill debate, Fianna Fáil’s Michael McGrath called on the Government to review the shoe and clothes size of the average 10-year-old. VAT kicks in for garments above that age range.

The Cork TD said an EU VAT directive means that the cut-off age of 10 can’t be changed, but it should be possible to increase the average sizes, not least because the limits were set in 1984.

Mattie McGrath supported him: “I won’t labour the issue, but first of all I’d better declare an interest. I have a number of children myself.”

“And they wear shoes,” said the acting chairman, John Lahart.

“And christening our fourth grandchild, thanks be to God, on Sunday,” continued the Tipperary TD, before reminiscing about the John Bruton/Jim Kemmy budget spat over children’s clothes.

“Even a small baby’s shoes are very expensive. You have to walk in those shoes to understand it,” concluded Mattie. Pity none of them thought to tell their more gung-ho political colleagues to act their age, not their shoe size.

Kildare Street can be paradise – for Shane Ross, at least

Paradise Papers. Remember them? Leinster House gets a mention in dispatches. But it’s only the one – the Winston Churchtown connection. Minister for Transport Shane Ross makes the cut as a director of the Baring Hedge Select Fund Ltd, which was registered in the Cayman Islands and was listed on the Irish Stock Exchange.

Ross, aka Winston Churchtown of Dublin Rathdown, was a director of the fund and at one stage gave his address as Leinster House, Kildare Street, Dublin. As you do. It’s like a home from home for them – until there’s an election, obviously.

It’s not clear from the leaked data when he stopped using the address. While Winston is probably not the only denizen of Kildare Street with wholly legitimate dealings with offshore entities, when you put Leinster House into the Paradise Papers data bank, the only “hit” that comes up is in relation to him and this directorship.

Back in the day, former stockbroker Ross was a director of a number of funds, which he declared in his register of interests. Not very juicy, but there you go.

No lack of confidence as Frances works the Dáil bar

In spite of the gathering storm, the Visitors’ Bar was busy on Wednesday night. Enda Kenny was ensconced in a far corner with a few friends and colleagues, full of the joys of whatever the next few days might spring.

The former Fine Gael leader says he won’t be contesting the next election, so there was a certain devil-may-care attitude about him as he greeted well-wishers.

As the night wore on, he didn’t bother nipping across to the chamber to vote. Been there, done that, was taoiseach. The talk in the bar was all about Frances Fitzgerald and the whistleblower controversy and what might happen the following day if Sinn Féin, as widely expected, tabled a vote of no confidence in the Tánaiste and former minister for justice.

As for the woman herself, she arrived in the bar near the end of the evening, oozing confidence.

Frances worked the room, doing the rounds of the Fine Gaelers present, laughing and joking and shaking hands with colleagues. Then she saw Enda, and he saw her, and massive hugs ensued.

The Tánaiste’s response was impressive after two very difficult days answering opposition questions in the Dáil, when she remained at the centre of a fierce media storm.

It was like she hadn’t a care in the world, and a sign that she wasn’t going to give into calls for her resignation.

Meanwhile, there was a most unusual sight in another corner of the bar. A group of Sinn Féin TDs were socialising over a few drinks – a most rare occurrence.

Outgoing leader Gerry Adams has remained a constant critic of the Dáil bar and called on many occasions for it to be closed down.

Among the happy group in its cosy environs on Wednesday was Gerry’s likely successor, Sinn Féin dauphine Mary Lou McDonald. We hear she was sticking to the tea and coffee. The gathering included TDs Martin Ferris, Martin Kenny and Maurice Quinlivan.

And there were dirty big pints on the table. What would Gerry say? The changing of the guard has started.

Crystal ball awards to Fine Gael’s Neale Richmond and Fianna Fáil’s James Lawless. On Monday morning, Senator Richmond, selected this week to stand in Dublin Rathdown, tweeted a photograph of himself holding a Fine Gael information brochure with the words “First canvass of the general election campaign this morning at Balally Luas stop”. The man must be psychic. And ditto for Kildare North TD Lawless, who sent this tweet on Thursday morning: “If there was to be an election, likely date is Thursday, 21st December. The winter solstice. A time of renewal and new beginnings?”