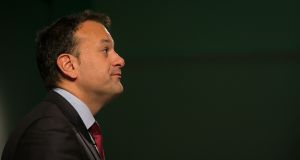 Leo’s conference speech performance at the weekend received what might be charitably described as a ‘mixed reception’. Photograph: Gareth Chaney/Collins

There is an odd atmosphere in the heart of Leinster House these days.

Vital building and renovation work is in full swing in the original part of the old building and the two main entrances, front and back, are closed. The imposing marble-floored entrance hall – always a bustling spot – is silent, along with the long corridor to the main staircase, Dáil chamber, offices and catering facilities beyond.

Now the stairs can only be approached from the side and rear of the complex. The big double doors linking the business end of the building to what is called the “historic House” are locked until further notice.

So it is quiet now in the vicinity of the Dáil chamber. The through-flow of bodies from all directions to the main corridor has been diverted and the natural pooling of people at the foot of the stairs is no more. Journalists have given up lolling on the blue leather banquettes at the wall, hoping to pick off passing politicians and advisers for some tasty gossip.

The ushers on duty outside the chamber doors look down the carpeted stairs now and don’t see much life. Save for members of the media going to the nearby press gallery, members of the public on tours and a few TDs and Senators taking the long way around, traffic on their landing had decreased considerably.

“We’re like a town that’s been bypassed by the motorway,” said one, summing up the situation perfectly.

But the work of governing, opposing and acting the maggot goes on.

The Taoiseach was fielding questions on the homeless and housing crisis and Gerry Adams had just asked his first one on the issue. He replied as he always does when a question comes from Sinn Féin – with a swipe at the Shinner asking it.

“Thanks very much, deputy, I’m glad you were able to join us today. I understand from your Twitter account you took yesterday off to prepare your ardfheis speech and I can see you’re already practising it here today,” dripped Leo, after Gerry read his lengthy question.

As he prepared to follow up with another example of his devastating repartee, Calleary nipped in like lightning.

“You obviously didn’t practise yours!”

Leo’s conference speech performance at the weekend received what might be charitably described as a “mixed reception”. Calleary’s quip had them rolling in the aisles – even Richard Bruton, sitting beside the Taoiseach, tittered away while Sinn Féin’s David Cullinan broke into a round of applause.

Varadkar looked up momentarily, then continued on without changing tone or cracking a smile.

Two Ministers of state rushed to defend their boss.

“He didn’t need to,” shouted the loyal Jim Daly.

Leo threw out the follow-up, even though he’d just lost his audience.

He looked at the Sinn Féin leader. “And you took most of last week off to travel to raise funds from very wealthy Americans which is something we will come back to at another stage.”

Gerry Adams didn’t bat an eyelid – even though the Taoiseach’s observation about Sinn Féin’s lavish annual US fundraising drive was entirely correct. He was still smirking after Calleary’s burn, and if those expensive fancy-dan dinners in Manhattan haven’t dented the party’s proletarian image by now, they probably never will.

Moving on to the never-ending controversies about Garda whistleblowers, Labour leader Brendan Howlin was keen to delve into who knew what about a legal strategy the former Garda Commissioner decided to pursue against whistleblower Maurice McCabe at an inquiry into allegations he made of serious Garda malpractice.

The Taoiseach said former minister for justice Frances Fitzgerald was only made aware “after the fact” that the Garda commissioner instructed counsel to attack Sgt McCabe at the hearing and that the current minister, Charlie Flanagan, had no knowledge of it either.

However, the state of knowledge of the Department of Justice remains something of mystery.

Howlin’s colleague Alan Kelly has been muttering darkly of late about serious goings-on in this case. The Taoiseach knows about the rumours of an allegation “so explosive it might bring down the government”. If the Labour party has an allegations to make, it should make them.

Charlie Flanagan was becoming more and more agitated because his name was being bandied about.

“I would ask you, Ceann Comhairle, for protection in this House. I will not have my good name and my professional reputation traduced by Deputy Alan Kelly both inside this House and outside.”

“I will ask Deputy Kelly desist now from engaging in a smear campaign against me personally and professionally.”

The Ceann Comhairle said he didn’t hear Kelly say anything.

“Outrageous,” huffed Alan. “I hope you’re going to protect me.”

“I had not hand act or part in thism” fumed Flanagan.

Brendan Howlin replied he never said he did.

“Yes, you did!” shrieked Charlie.

“The Department of Justice has said to me that they were not made aware of it until after the fact, but the Department of Justice is a big place. It’s not a person. It’s a person, or it’s a body that has hundreds of staff. And can I put my hand on my heart here and say that there is not one person somewhere who might have been told something by someone . . .”

Mary Lou McDonald looked up over her spectacles.

“What kind of answer is that?”