Miriam Lord: Tourists ask Higgins to show them the way 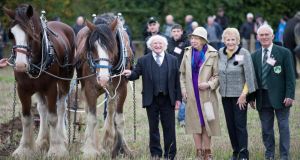 President Higgins must be very keen to keep to his campaign timetable, we mused, as he addressed the crowd at the Ploughing.

He appeared to be wearing two watches.

However, upon closer inspection, we discovered that Michael D was wearing a Fitbit on his wrist, along with a watch.

We hear he has embarked on a major fitness regime to prepare for the electoral fray and has already lost a lot of weight. There certainly seemed to be less of him in his Donegal tweed three-piece when he was working the crowd in Screggan on Tuesday.

The man was everywhere these days. The following night, he turned up at a traditional music session at the Clé club in Dublin’s Liberty Hall. The Clé (meaning left) club was set up by a group of Labour Party and trade union members during the boom as an antidote to the brash K Club set polluting the airwaves and newspaper columns at the time.

Michael D and Sabina turned up at an evening dedicated to the memory of former trade union official, socialist and renowned singer Jimmy Kelly, brother of Luke. The Kelly gang were out in force, led by Jimmy’s wife, Máirín.

The crowd included Jimmy’s friends from Siptu, the People’s College Choir, the Góilín singers club and anyone who ever warbled a note at the Clé club. The surprise visit of the President and his wife added a special dimension to the night. Jimmy was a close friend of both of them and Sabina Coyne was bridesmaid at Luke’s wedding to actor Deirdre O’Connell.

Michael D was in his element, singing along.

Eugene McEldowney, late of this parish, channelled his inner Delia Murphy, with a rousing version of “Thank You Mam, Says Dan” while mountaineer Frank Nugent sang the Ewan MacCall song “The Joy of Living!”

It was noted that the President knew all the words of “Three Lovely Lassies from Kimmage” and he loudly cheered when John Sheehan of the Dubliners took the stage. Politics was off the agenda but the election was clearly on everyone’s mind. In an ecumenical gesture, veteran trade unionist and MC Des Geraghty introduced Sinn Féin councillor Larry O’Toole before he sang as “a guaranteed number two”.

At the end of the night, there was quite a hullabaloo on Eden Quay as the President was departing, with selfies galore on the footpath.

In the middle of all of this, a couple of tourists – a mature German couple – wandered into the company. The man held out a piece of paper and said something to Michael D, who patted his pockets as if to find a pen. But someone else grabbed the President’s attention before he was driven away.

The Germans, it turned out, were lost and trying to find directions to their Airbnb accommodation in Donaghmede on Dublin’s northside.

They couldn’t believe it when informed they had just asked the President of Ireland for directions to their lodgings. The balladeers put them in a taxi and sent them on their way.

When it’s Culture Night and you happen to be the Minister for Culture, it’s always good to have a little something prepared if called upon to do a turn.

So when Josepha Madigan attended a poetry event compered by Olivia O’Leary in the Seanad Chamber on Friday to mark the 100th anniversary of women’s suffrage, she wasn’t found wanting. Josepha, who already has one self-published novel, “Negligent Behaviour”, under her belt and spent part of her summer break at the Tyrone Guthrie Centre in Monaghan working on a follow-up, performed one of her own poems on Culture Night. She writes poetry too and is hoping to publish her first volume in the near future.

The Minister read “Diet Coke”, a wistful and very touching piece about how she felt when her father died and how those feelings came rushing back when her younger sister Edwina was dying from cancer in 2016.

Earlier in the week, the solicitor-turned-TD displayed another string to her bow when she officially opened the Goethe Institut’s new Merrion Square premises.

Three-quarters of her speech was in German. Her audience was delighted.

She said it was her first time speaking in German as a minister, but she studied the language in college before going on to study law.

“There was even a time when I lived in Vienna, almost 30 years ago, that I used to dream in German. I used to keep a diary and wrote everything in German as if it were a secret language. Apparently, I speak German with a Cork accent.”

Then Josepha told them she still has to “practise my Hochdeutsch and not descend into spontaneous Umgangssprache”.

The crowd gave her a standing ovation.

While Labour’s Alan Kelly was exhorting his colleagues to have a greater media presence at his party’s think-in behind closed doors in Drogheda, the media was doing its best to help the process along.

The party was in the D Hotel in Senator Ged Nash’s home town. As members tried to appear nonchalant in the face of recent ructions about leader Brendan Howlin’s suitability for the job, they retired to the safety of their conference room and shouted at each other in private.

Unfortunately, the press room was located close by and journalists were able to hear what was being said by the politicians if they stood in a small ante-room between the two spaces. When a party official rumbled them, he stayed inside the door, shooing hacks away when they tried to creep up again.

But there was a story to be filed and the intrepid political scoop merchants were determined to hear what Alan “AK47” Kelly was going to say inside the hall.

So they left the press room and galloped around en mass to the main door and pressed themselves up against it. This worked a treat, as the following day’s newspapers duly showed.

Requests to “clear the floor” from an official were ignored. So in the end, a woman from headquarters stood on the other side of the door and started drumming her nails against the wood until the discussions were over.

A photograph of the journalists doing their thing surfaced on social media and it made our inky hearts swell with old-fashioned pride.