Varadkar: ‘Nobody in the EU or Ireland is to blame for Brexit’ 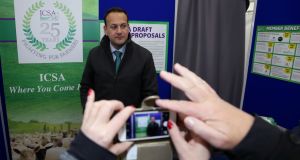 Taoiseach Leo Varadkar: “The EU is totally united, not just behind Ireland but also behind the single market.” Photograph: Brian Lawless/PA Wire

Taoiseach Leo Varadkar has acknowledged Brexit negotiations are entering a “rocky patch” but expressed confidence a deal will be ultimately be brokered between the European Union and the United Kingdom.

During a visit to the Ploughing Championship in Co Offaly on Friday, Mr Varadkar said he did not envisage Irish farmers and businesses paying World Trade Organisation tariffs next year despite the setback on Brexit at the informal EU summit in Salzburg this week.

“[WTO] tariffs would only arise in a no-deal scenario. I’m working every day, as are other people across Europe, as is the UK government, to avoid a no-deal scenario where we have a no-deal hard Brexit next March,” he told reporters.

“I think we can have a deal. I think we are entering into a rocky patch over the next couple of weeks. I am determined to keep working and secure the deal that we need before the end of the year, ideally in October and November.”

Mr Varadkar said there had been a lot of speculation in the British media in recent weeks that had been way off the mark and had led to false expectations in Britain as to the outcome.

“There was a sense created in the UK press that there was division around the EU table, among the EU 27. There is not. The EU is totally united, not just united behind Ireland but also united behind the single market.

“Perhaps the sense was created that [UK] prime minister [Theresa] May would come away with something more positive than occurred. I don’t think anyone in the EU or Ireland is to blame for that.

“Ultimately the problems that are created for Britain and the British government are being created as a consequence of Brexit, and nobody in the EU and Ireland is to blame for that,” he said.

Asked on his view on Ms May’s Chequers proposal, he said it related to the future relationship between the UK and the EU, and that the Border backstop question was separate to that.

“People think the only outstanding issue is the Irish protocol. It is not. The future relationship is also outstanding. There is a lot yet to be agreed.”

He said the Chequers proposal could have an input in future talks but there were “obvious problems” with it.

“The proposal, for example, that there be two customs schedules. That can’t work.

“Also [I disagree] with proposals that have been put forward to divide the freedoms, to disrupt the integrity of the European single market by having a freedom of goods but not services.

“In the same way as the United Kingdom wants to retain control of its money, its borders and its laws, so does the European Union.

“There will have to be compromise if we are to find an agreement.”

1 Trump postpones election rally as Covid-19 cases surge
2 Johnny Depp: Ex-wife or friend defecated in bed in ‘fitting end’ to marriage, court hears
3 Brightest comet of the century visible in Irish skies for the next week
4 Reopening of pubs that do not serve food may be delayed beyond July 20th
5 An Taisce publishes 2020 top ten buildings at risk register
Real news has value SUBSCRIBE