Removing blasphemy from Constitution will confirm Ireland as 'modern State' 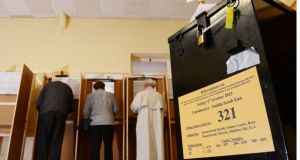 Removing the offence of blasphemy from the Constitution will confirm Ireland’s status as a modern democratic society where free speech is valued and multiculturalism is embraced, Minister for Justice Charlie Flanagan said.

Mr Flanagan introduced legislation to allow a referendum take place on the issue on October 26th.

The House passed the 37th Amendment of the Constitution (Repeal of offence of publication or utterance of blasphemous matter) Bill without a vote and the legislation now goes to the Seanad.

If the public votes to remove blasphemy from the Constitution, Article 40.6.1°.i will state: “The publication or utterance of seditious or indecent matter is an offence which shall be punishable in accordance with law.”

Mr Flanagan said as long as the offence remained in the Constitution, Ireland would be seen internationally as “a country which keeps company with those who do not share the fundamental values we cherish such as belief in freedom of conscience and expression”.

Fianna Fáil spokesman Jim O’Callaghan said the last recorded prosecution for blasphemy was in 1855 against a Redemptorist priest who accidentally burned a Bible and was prosecuted but acquitted.

He said the great value of the Constitution is that “it is not frozen in the 1930s. It can be changed readily. It needs to be updated and modernised, but the fundamentals are strong.”

Sinn Féin justice spokesman Donnchadh O Laoghaire described the offence as “an outdated piece of the Constitution. This is an important step forward in a society where the fundamental belief in freedom of speech must be a central tenet and valued by all”, in an increasingly diverse society.

But Labour TD Sean Sherlock and People Before Profit TD Richard Boyd Barrett questioned the retention of the offences of indecent and seditious matter.

Mr Boyd Barrett said: “One person’s sedition is another person’s completely legitimate criticism of institutions of the State or of society, or of particular laws. And the work of many of the best writers of this country was considered ‘indecent’, including that of James Joyce.”

The Minister said however that sedition and indecent matter were covered by law and it was right to have laws for offences such as the production and distribution of child pornography.