Miriam Lord: The Prince and the schoolgirl entrepreneurs

Britain's Prince Charles and his wife Camilla have begun their tour of Ireland with a reception at Áras an Uachtaráin hosted by President and Sabina Higgins. Video: Bryan O'Brien 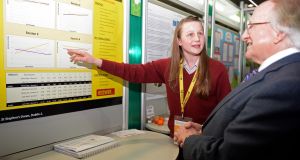 Kate Madden of Loreto College on St Stephen’s Green, explains her project Will Eating a Mars Bar Increase the Average Speed of a Galloping Pony? to President Michael D Higgins back in 2013. Photograph: Eric Luke

Two young entrepreneurs made a big impression on the Prince of Wales and Duchess of Cornwall when they met in Áras An Uachtaráin on Wednesday.

Sisters Annie and Kate Madden, who are the driving force behind FenuHealth, a range of dietary supplements for horses, were among a group of high-achieving young people invited by President Michael D Higgins to meet the royal couple. The teenagers, who commute from Summerhill in Meath to school in Loreto on the Green in Dublin, did such a good sales job that Charles and Camilla requested their business cards and, in an unusual departure, kept them.

The normal drill is to immediately hand over anything they are given to one of their staff.

The President and his guests stayed way over the allotted time with Annie (15) and Kate (16). Camilla told them she was going to get FenuSave for her horse. Apparently, it prevents gastric ulcers.

The young women seized the chance to ask Charles, through his Prince’s Trust, to help them employ a sales person in the UK and he immediately agreed.

Then they asked the Duchess if she would present the prizes at a race they plan to sponsor in England and she said she would be delighted to do it.

They are also hoping Sabina Higgins might do the prizegiving at a race FenuHealth is sponsoring in Leopardstown. Michael D has taken a big interest in their endeavours since first meeting Kate at the Young Scientist Exhibition in 2013, when she investigated whether Mars Bars make horses run faster.

Already bouyed by the reaction from Charles and Camilla, the girls couldn’t believe it when a follow-up email arrived from the British embassy inviting them to meet the royal couple again at a function in the ambassador’s Glencairn residence.

A third sister, who prefers to stay out of the limelight, is also a vital part of the team. Claire (14) is their marketing whizz and does a huge amount of work on packaging, label design and advertising.

These secondary school students already have eight employees on their payroll and are exporting to 12 countries around the world, with particular demand coming from the Middle East.

Prince Charles was delighted to hear from Kate that the King’s Troop, a ceremonial mounted unit of the British army, will begin using some of their products in the autumn.

This week’s (unofficial) royal seal of approval will have done them no harm either. “We’ve had a brilliant few days and it went way better than we could ever have expected. The Prince and Duchess were really friendly and the President and his wife were great fun. Princes Charles met us yesterday for the second time and he remembered everything about us. We’re going to work harder than ever now on our business,” said Kate.

The Taoiseach takes a break today from his continuing efforts on behalf of The Best Small Country in the World in which to be Directly Affected by Brexit. He’s had a very busy week and needs some down time.

So he’ll be taking part in a 60km charity cycle around Sligo and Leitrim this morning. As you do.

Enda isn’t behaving like a man in wind-down mode. He is joining TD Tony McLoughlin and a large peleton from clubs in the region for a loop around Lough Gill. Their spin around the lake starts from Sligo town will pass through Strandhill, Ransboro, Ballisodare, Ballygawley, Ballintogher and Dromahair.

Taking the scenic route, rather like Enda’s approach to his possibly imminent departure.

“I asked him months ago if he would take part in a fundraiser and he said he would. But with the way things are going and that, I didn’t think he’d get back to me on it. Then a couple of weeks ago he stopped me in the chamber and said he hadn’t forgotten. Fair play to him.”

Today’s event is in aid of the North West Hospice in Sligo and the local branch of Cystic Fibrosis Ireland.

Unlike the Taoiseach, who is a keen cyclist, Tony says he’ll do his best to keep up but isn’t promising he’ll stay the distance. “I’ll give it my best shot. At least for the first few junctions.”

Enda’s appointment diary is fairly full for next week, the week when he is expected to announce he is standing down from the leadership of Fine Gael.

On Tuesday, to the relief of political anoraks everywhere, he is launching the much-awaited Nealon’s Guide to the 32nd Dáil and 25th Seanad. Edited by communications consultant and former political journalist Tim Ryan, the Taoiseach is down to do the honours at a reception in the Irish Architectural Archive on Merrion Square.

The following day, at three in the afternoon, he is in the Italian Room of Government Buildings to launch a report compiled by Senator Marie Louise O’Donnell called Finite Lives.

This is a very serious study by Marie Louise; an examination of State services in the area of death and bereavement.

But will the event be the penultimate gig of Enda’s Not Gone Yet Tour?

He has told friends he will not be rushed and will “go in my own time and on my own terms”.

After Senator O’Donnell’s event, he is due to attend the Fine Gael parliamentary party meeting, where the topic of finite political lives will be front and centre. This week, giving nothing away, he told his colleagues he will address the matter next week.

Some still fear Enda will attempt to do a Buzz Lightyear on the proceedings and set out a path to infinity and beyond. Yesterday, there was a major outbreak of queasiness in the FG camp when unconfirmed rumours swept through the ranks of yet another important foreign trip appearing on the Taoiseach’s never-ending horizon.

Backbenchers said there was talk of Enda undertaking a mission to America from June 5th-9th and, consequently, he might not be as definitive about his departure this week as they might be expecting.

Under party rules for leadership elections, he has to step aside by early June for administrative reasons to avoid having the vote deferred until autumn.

“He could still start the contest next week and still be Taoiseach until the second week in June,” said one “cautiously hopeful” TD yesterday. “But he’s been pulling rabbits out of hats for months now. Nothing would surprise me about Enda now.”

DAVID DAVIN-POWER: EXEMPLAR OF STEPPING DOWN

For a man who is on the fast track to the finish line, the Taoiseach has been in very good form these days. Particularly as he doesn’t really want to go.

Enda nipped into the Dáil bar on Wednesday night for the going away drinks hosted by the Oireachtas Press Gallery for RTÉ’s departing political correspondent, David Davin-Power.

With his “superb journalism”, DDP “brought clarity and succinctness to a very difficult time in our country” said the Taoiseach, referring to the years David spent reporting from Northern Ireland. “You have made your mark on Ireland and you have made an imprint on journalism and reporting.”

In a very entertaining reply, DDP recalled how his stint in the North didn’t begin too well. Four hours after he arrived in Belfast to begin a new chapter in his career, RTÉ went on a lengthy strike.

As for his time covering politics from Leinster House, he said he “enjoyed every day of it”, even the tough ones. He counts the day the troika came to town as one of the most depressing events of his journalistic career.

Given that he is moving on, David had a few words for Enda, who hasn’t gone anywhere yet. He recalled a story about Vincent Brady, a former Fianna Fáil TD who was ousted by his constituency organisation around the time Charles Haughey stood down as party leader.

In a futile attempt to get reinstated, he went out to Haughey in his Abbeville mansion and pleaded him to intervene on his behalf.

“Vincent” growled CJ, “You don’t understand. You might be going. I’m gone.”

DDP looked across at Enda.

“If you stay to greet the Pope . . . ” mused Davin-Power. “If you look longingly at the centenary of the first Dáil. If you even think that the job of binding the wounds a century on from the Civil War is the job for you, well, good luck to you! But, on the other hand, if you bow out, I’d like to wish you, Fionnuala and your family, as you have wished me, long health, long happiness and long retirement because I think you deserve it.”

And he finished with a quote from Swift on politicians: “A mingled mix of good and bad, the best and worst we could have had.”

Politicians really find it hard to walk away. Particularly those in power. Enda Kenny is a prime example, but an interesting little struggle came to an end recently when Minister of State Seán Canney finally threw in the towel and announced his colleague Kevin Boxer Moran will be taking over from him as minister with responsibility for the Office of Public Works, as per their post-election agreement.

Publicly, Seán wished his fellow Independent Alliance TD every good wish in his new role and pledged to give him any assistance he can in the coming months. But behind the scenes, we hear the TD for Galway East fought a fierce rearguard action to hang on to his ministerial portfolio.

His request for one more year in charge of flood relief and the OPW got nowhere, with the Boxer refusing to stay in his corner now that his time has come. A suggestion that perhaps the Taoiseach would create another junior minister wasn’t entertained.

Boxer Moran will be on the Late Late Show next week in anticipation of his elevation. No doubt the entertaining deputy for Longford/Westmeath will maintain a diplomatic silence on the issue.