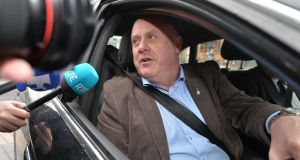 A rare outing from the lesser-spotted Grealish, whose infrequent contributions to parliamentary proceedings are not keenly anticipated because he never says very much. This latest one promised to be no different.

Noel Grealish likes to keep things local on the rare occasion he takes the Rural Independents’ slot at Leaders’ Questions: Galway hospital; funding for Connacht rugby; and the Apple data centre in Athenry were the chosen subjects for his three appearances in 2019. Apart from that, he managed seven further in the course of the Dáil year, three of them on the same night when he spoke on a national children’s hospital motion tabled by his own political group.

So when he got to his feet during Leaders’ Questions on Tuesday, the national parliament was not exactly agog.

He began talking about the €10 billion which has been transferred from Ireland to other countries in the last eight years. “A staggering amount of money,” said the TD for Galway West, going on to list countries which received the largest amount of personal money transfers from people living here.

They included Lithuania and France, with Poland in third place, the UK in second and Nigeria getting far and away the biggest amount (€3.54bn) from Ireland.

Suddenly, the low hum of conversation in the chamber stopped. The Taoiseach and Tánaiste looked up and across the floor at Grealish. The press gallery became more attentive.

Just where was Grealish going with this?

Now, said deputy Grealish, he can see why so much money is sent to the UK “our nearest neighbour”. Many good reasons for this, some of which he outlined.

“Taoiseach, transfers to other EU countries I can understand,” he declared, as eyebrows went up on all sides of the House.

“But Taoiseach, €3.4 billion transferred to one non-EU country is astronomical,” said Grealish, clearly very concerned. We were worried ourselves – not for the same reason as he was, but in case the dog at home heard Grealish’s powerful whistle and escaped.

A lot of that money could be dirty money, obtained by criminal means. Is there any way of checking that this non-European money from Nigerians is legit?

“Taoiseach, we can’t have a situation whereby vast amounts of money are leaving the country with no proper controls or monitoring in place. My question to you Taoiseach is: can you give assurances that all these moneys, which are being transferred in personal remittances have been fully accounted for within the Irish revenue and tax system?”

Maybe Grealish was concerned because Ireland has had a recent, troubled history of large sums of money leaving the jurisdiction and ending up in offshore accounts. Bogus offshore accounts. The amounts stashed away in them not so long ago by our homegrown pillars of the community make the remittances to the non-European countries in Africa look like chickenfeed.

Deputy Grealish has been interested in this subject for the last couple of months since he told a public meeting in his constituency about a planned direct provision centre that the people accommodated in it would be “economic migrants from Africa” who are “spongers”.

That was in September. And last month he submitted a written question to the Taoiseach’s department enquiring about “the amount sent out of Ireland in personal remittances in each of the past 10 years; and the countries to which they were sent each year”.

An answer was duly supplied.

And then he followed up on Tuesday with his question to the Taoiseach on the floor of the Dáil. Viewed in the light of Grealish’s very few verbal interventions on any issue in the chamber, this represents a frenzied outburst of action from him.

The Taoiseach was equally puzzled by his line of questioning.

“The numbers that you quote are, no doubt, correct but I’m not quite sure where you’re going with this,” he generously replied.

Most of us had a very good idea where Grealish was heading.

Leo Varadkar reminded him of our own recent past – a past with which deputy Grealish, who is from Carnmore, would be familiar.

Everyone knows the stories of Irish people going all over the world to work and sending back remittances to Ireland. The Taoiseach’s late grandmother, who was from Waterford, used to tell him about the cheques that came back from America. All her family emigrated there.

He noted the distinction drawn by Grealish between EU money and non-EU money. Take a walk down the road to Holles Street and “you’ll see a hospital full of midwives from India, nurses from the Philippines and doctors from Egypt, Pakistan” and everywhere else.

These are hardworking people who pay their taxes and send their money home.

“That is the way the world works, and it is the way Ireland worked and still will for decades.”

As for the money laundering and the rest, there are controls and protections in place.

Interestingly, one of the rare contributions from the lesser-spotted Grealish was earlier in the year when he spoke in support of a Fianna Fáil motion on the need to protect local radio stations.

“Many people have spoken about local radio stations but it is important that we speak about the people who are abroad. A lot of my family unfortunately had to emigrate, to the United States in particular. My local hurling club went to two county finals in the early 1990s. We used to do a deal with Galway Bay FM. The people abroad would ring the local radio station, which would be doing commentary...”

No doubt his people in the US (acceptable non-EU country) sent the few bob home as well.

Socialist TD Ruth Coppinger was outraged by Grealish’s remarks. She accused him of “disgraceful racism” and refused to take it back when he and his colleagues Micheal Healy-Rae and Mattie McGrath protested.

In his follow-up question, the Galway West TD said: “we have to assure the people” that money leaving the country is not the proceeds of crime. Although he conceded “an awful lot of it is genuine”.

The tone of his contribution was defensive throughout. As TDs began to heckle him, with shouts of “disgrace” ringing out, he sat back and said sulkily: “I’m entitled to ask a question in this House.”

Nobody said he wasn’t. But they don’t have to like the question.

Coppinger, meanwhile, was not backing down. “I’ll always shout down racists,” she declared to the Ceann Comhairle.

“There’s not a hope in hell of me withdrawing. Ok?”

And nobody tried to argue with her.

Her accusation, levelled under privilege, brought to mind that celebrated quote from Fr Ted after the hapless cleric lands himself in hot water following a tasteless joke.

Probably won’t be long before somebody, on foot of Coppinger’s Dáil utterance, says something similar to Noel Grealish, for the laugh.