‘Almost two months I was stuck. It was really stressful worrying about the things going wrong here’ 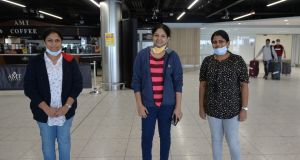 Princey Phillips, Jismey Jose and Teena Matthew who will be working in Nursing Home in Kildare, Dublin and Roscommon, some of over 50 health care professionals who arrived in to Dublin Airport on a flight from India. Photograph: Alan Betson / The Irish Times 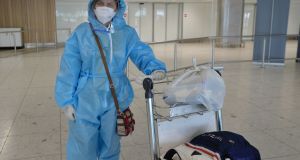 Pharmacist Krishna Priya Kodumadu Venkittaraman from Tamilnadu one of over 50 health care professionals who arrived in to Dublin Airport on a flight from India. Photograph: Alan Betson 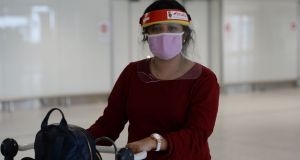 Akshara Anu James, who works as a nurse in a Dubli n Hospital, one of over 50 health care professionals who arrived in to Dublin Airport on a flight from India.Photograph: Alan Betson

Some 55 healthcare workers arrived into Ireland from India on Tuesday as part of a special repatriation flight, organised by the Indian government.

The workers, most of whom are nurses, flew from New Delhi on Monday and arrived into Terminal 1 of Dublin Airport on Tuesday evening.

The flight was organised as part of the Vande Bharat mission, which seeks to repatriate stranded Indians.

The medics will now undergo 14 days of quarantine, before they are able to begin their duties.

Krishna Priya Kodumadu Venkittaraman, from Tamilnadu in India, worked part-time as a pharmacy technician in Ireland for eight months.

When she secured a full-time job in February, she decided to fly home to visit her family for two weeks before taking up her post, but ended up stranded in India for more than two months.

“Almost two months I was stuck. It was really stressful, thinking about and worrying about the things going wrong here. There was no option to travel. So this is a repatriation for the Indian government to take back stranded Indians from Dublin to India so we had an opportunity to come back on that flight,” she said.

“The embassy gave me a mail stating permission to travel so it helped me with crossing the borders and reaching here.”

Ms Priya Dodumadu Venkittaraman, who is also a final year student in UCD, said she was “very worried” about the people of Ireland during the coronavirus pandemic and wanted to return to help.

“I definitely like it [MY JOB]because I am a pharmacy professional, we get lots of respect in this country compared to what I get in my country. I like everything about Ireland -the culture, the university and, it’s very good exposure for us.”

Akshara Anu Jaines, who has worked as a nurse in Ireland for the past three years, was also stranded in India for longer than expected following a holiday.

“It was my usual vacation and I went to India but the next day when I reached India, it was completely locked down. It was nearly three months when I was in India,” she said.

“There was no option to come back so it took some time for us to come back. I enjoy it a lot. That’s the reason I’m coming back here. If I didn’t enjoy it, I wouldn’t come back, I would have stayed in India. The people are very nice.”

“I want to work here because it’s a beautiful place and also the people here are very co-operative, I heard that from my friends,” she said.

“I’m going to work in a nursing home in Kildare. You can take care of the old age people. I like to help like that.”