Miriam Lord: Leo dreams of a lie-in as new Luas is launched 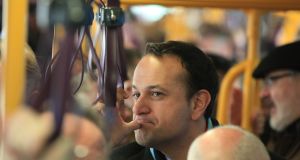 If the timing had been different, last week’s launch of the shiny Luas Cross City service would have provided a perfect platform for an ambitious young Taoiseach doing well in the polls to kick off a general election campaign.

Leo Varadkar, standing in the historic confines of the GPO behind the snazzy branding of his “Government of Ireland” lectern, wasn’t slow to remind his successors in the Department of Transport that he was the minister who made it all possible.

“Back in 2011 or 2012, I took the decision to give the green light to this project and I remember signing the order for us to go ahead and asking my officials at the time: ‘When will it be finished?’ And they said to me: ‘If it happens on time and on budget [and it has happened on time and under budget] it will be 2017’.”

As he was already a man in a hurry, that deadline seemed an awfully long way away.

“And I remember feeling a little bit dejected that day because I thought to myself: ‘2017 – sure, I could be anywhere then!’ But as it turns out I’m here, and really pleased to be here ...”

First the Taoiseach listed all the business benefits the Luas Cross City will bring to the capital.

“It’s also going to help people get home that little bit early – maybe that extra 10 or 20 minutes every day: more time to spend with the kids, more time to watch TV, maybe a little bit more time in bed ... eh ... all things that I think will improve our lives.”

He looked up at the crowd when he mentioned bed, waiting for a reaction, but it took a second for the penny to drop.

Shane Ross, the current Minister for Transport was first to twig and he guffawed so heartily he might yet make it back into Leo’s good books.

Fine Gael activists from around the country gathered in the Alexander Hotel on Thursday for their annual superdraw – the party’s biggest fundraiser.

Donal and Joan Kelly from Cork will have been delighted to hear they scooped the top prize of €20,000. Donal is a long-standing Fine Gael supporter and was director of elections for former Fine Gael TD for Cork South West Noel Harrington. The Castletownbere businessman had been planning to cancel his superdraw direct debit because he was unhappy about the Government’s commitment to the fishing industry, but he didn’t get around to it.

It was slim pickings this year for the politicians, with Senator Tim Lombard the only elected representative to figure on the very long list of winners. He won €1,000. Former Labour Party senator Lorraine Higgins, now with Retail Excellence Ireland, won €150.

Millionaire Cork businessman Jerry Carey, who is a party trustee, made a rousing speech in which he thanked all those who contributed to the raffle and lavishly praised general secretary Tom Curran for his great work for the party.

Earlier on Thursday, Curran treated the trustees, along with the executive council, to lunch in Leinster House.

Every ha’penny counts when a general election could be on the horizon, although some wags were wondering how much, if any, of that precious war chest might have to go towards paying off the bills left over from former TD John Perry’s High Court action against the party two years ago.

He also praised Fine Gael head office fundraiser, Helen Connolly, for her low-key manner when it comes to soliciting funds. “Not like Anne Strain, who used to bate us all into buying tickets,” he added, in a reference to her predecessor, who spent 10 years in the job.

We hear that Strain, who was spotted dining in the members’ restaurant with impressionist Oliver Callan recently, was not at all happy with the remarks.

Love and mellowness fill the Seanad

Never mind that announcement from Kensington Palace that Prince Harry and Meghan Markle will marry in May.

The big news is that Fine Gael Senator Jerry Buttimer is marrying the love of his life in Cork on December 29th. This explains why he’s been walking around like the happiest man in the world for the last few weeks.

Jerry is tying the knot with his partner of 10 years, Conchobhar O’Leary, in the beautifully restored Triskel Christchurch venue in Cork city. It’s going to be a big wedding.

Leo Varadkar will be among the guests, along with former taoiseach Enda Kenny and Tánaiste Simon Coveney.

Senators gave their best wishes to Buttimer during the Order of Business on Thursday. “I wish the Leader of the House an especially happy Christmas and new year and wish him well with his nuptials. I know that marriage will mellow him,” said Sinn Féin’s Rose Conway-Walsh. “Marriage has mellowed the worst of us.”

The Seanad Cathaoirleach, Fianna Fáil’s Denis O’Donovan, added his congratulations during his speech on Wednesday night during a dinner he hosted in Leinster House for Seanad staff and political group leaders.

Buttimer, a former TD for Cork South Central, is the founding chair of Fine Gael’s LGBT group and was the first Fine Gael TD to come out as a gay man.

Jerry and Con, who is a teacher, are holding their reception in the Rochestown Park Hotel before flying off to honeymoon in Paris.

The impending Christmas break had everyone in good humour this week, even if there were a few sore heads around the House after the various parties held their parties.

In what looks like becoming a tradition, Sinn Féin’s Aengus Ó Snodaigh wore a novelty tie into the Dáil chamber on Thursday. Last year the deputy for Dublin South Central made international news when his neckwear burst into a medley of Christmas carols as he was on his feet in the chamber and asking a serious question about asbestos.

At first glance, he appeared to be wearing a normal tie with a silvery pattern of small black and grey squares.

“For the 12th time since it was promised in October 2012, I will ask about legislation to transfer the digital hub from State control to the control of Dublin City Council. When will we see that legislation? Any time I ask, I am told it is ongoing,” he told the Tánaiste during Questions on Promised Legislation.

There was a sleepy lunchtime atmosphere in the chamber as he spoke. Few TDs were paying attention.

Then Aengus switched to Irish.

“Go raibh maith agat,” murmured Leas-Cheann Comhairle, Pat “The Cope” Gallagher, in his lovely Donegal Irish, as Aengus pressed a button in the knot and his tie began to flash in glorious technicolour.

“Be careful you don’t start a fire,” shouted a Government TD.

Ó Snodaigh replied in Irish that at least this time his tie didn’t start playing music.

Pat the Cope, getting into the spirit of the occasion, decided to advise caution. “Even on RTÉ, they always say about flash photography. I warn members there is flash photography in the House.”

Simon Coveney, meanwhile, couldn’t stop chuckling, and he told Aengus to make sure that his wiring had no loose ends.

“Congratulations on your Christmas spirit. It got a few smiles in the House, which is always good for a change,” complimented the Tánaiste.

What will Aengus do next year? We’ll be expecting a show from him now.

Speaking of the Ó Snodaigh tie, we were intrigued to see Mary Lou McDonald looking so down in the mouth when Gareth Chaney photographed her having a chat with party leader Gerry Adams during a homelessness protest outside the Dáil on Wednesday.

What was he saying to make her so upset?

Was he telling the woman who will succeed him as Sinn Féin leader early next year that being in charge isn’t all it’s cracked up to be?

Or was he explaining: “Mary Lou, a chara, while I hate to break the bad news, we think it would now be wholly inappropriate for you to wear light-up antlers and flashing Christmas earrings into the Dáil this year. Instead, the Ard-Comhairle has decided Aengus Ó Snodaigh will wear a flashing novelty tie tomorrow to show how Sinn Féin is all about the Christmas craic. Sorry, Mary Lou. Maith thú!”

Senator steps up to the mic

Congratulations to senator Neale Richmond who became a father for the first time earlier this week.

Neale, who was selected last month to run for Fine Gael in Dublin Rathdown, has seen his public profile soar since the Brexit negotiations hit the headlines. He is FG’s Seanad spokesman on EU affairs and chairs the Seanad Special Select Committee on the Withdrawal of the United Kingdom from the European Union.

As a result, the senator has been in big demand with radio and television stations around Europe looking for an Irish Government viewpoint on the evolving Brexit situation. The party press office tells us that in the last two weeks, Neale has spoken on BBC radio 21 times, BBC television seven times, Channel 4 on three occasions, TV4 Sweden on three occasions and has also said his piece on Russian, Estonian and French TV.

However, his media outings came to an abrupt but happy halt last Sunday when his wife Babs, a teacher, went into Holles Street and gave birth in the early hours of Monday to a 7lb 2oz baby boy, Luke.

Mother and baby are doing wonderfully and besotted Dad has blissfully forgotten Brexit, for now.