Amnesty Ireland should not have to return funds from George Soros, says Emily Logan 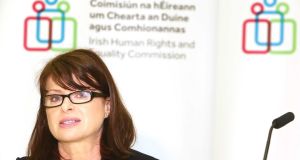 Foreign donations from legitimate organisations to Irish human rights campaigning groups should not necessarily have to be returned, Emily Logan, the chief commissioner of the Irish Human Rights and Equality Commission, has said.

Her declaration comes in the wake of a ruling by the Standards in Public Office Commission (Sipo) that Amnesty Ireland should return €137,000 it received from the Open Society Foundations, funded by billionaire George Soros.

“I think it is reasonable to say that [such donations] are legitimate,” said Ms Logan, adding that the commission will discuss concerns among civil society groups about Ireland’s electoral funding laws.

Saying that Ireland has always had a strong international human rights reputation, Logan said repressive laws are increasingly being used in Eastern Europe “to shrink the space” for human rights organisations.

Now, however, concerns have been raised directly with her by civil society organisations concerned that “an expansive interpretation” of campaign finance laws is now being adopted by Sipo.

Open Society gave money to Amnesty in early 2016 to support changes to Ireland’s abortion laws, along with donations to Abortion Rights Campaign Ireland and the Irish Family Planning Association (IFPA).

Amnesty chief executive Colm O’Gorman has said the way Ireland’s political funding rules are now being implemented by Sipo will “shut down” advocacy work across a whole range of issues.

The Act is overseen by Sipo, which has in the past said that the law as it affects “third parties” involved in political activities uses definitions that are so wide they could unintentionally cover organisations such as Tidy Towns committees, the Society of St Vincent de Paul, and representative groups such as Ictu and the Credit Union Movement.

A spokesman for the commission said it was its role to ensure the Act was complied with and that in relation to donations to third parties, “a lot comes down to the intention of the donor”. The law refers to donations “given for a political purpose”.

Michael Moriarty, an accountant and board member in the not-for-profit sector who has researched philanthropic funding in Ireland, said non-Irish philanthropic organisations, such as Chuck Feeney’s Atlantic Philanthropies, have helped groups advocating Irish constitutional change. This was the case in the run-up to the children’s rights and marriage equality referendums.

“However, Sipo now seems to be enforcing the rules in a way it didn’t a few years ago,” he said. This might be because the issue is receiving more scrutiny in the run-up to the abortion campaign.

“They are probably concerned about money coming in from overseas for both sides.”

However, the spokesman for Sipo said there had been no change in how the law was being implemented. “In the past it may not have been possible to say a contribution was given for political purposes.”

Irish electoral funding law prohibits foreign funding of groups involving in referendum campaigns. The funding law also prohibits donations of more than €6,348 in any one year to a third-party organisation.

A spokesman for the Open Society Foundations told The Irish Times it was “proud to be just one of the sources of support for local advocacy efforts to bring Ireland’s abortion law in line with its commitments under international human rights law.”

“Here at home we must respect those same fundamental freedoms that support the legitimate work of civil society actors.

“I will table this matter for consideration by the Irish Human Rights and Equality Commission at its next meeting. The Commission’s decision will be made public.”

Ivan Cooper of the Wheel, which represents 1,300 member organisations in the community and voluntary sector, said the Humanist Association, Education Equality, the IFPA and the Irish Council of Civil Liberties have all expressed concern about how our electoral funding laws are being implemented, in the wake of their being contacted about funding issues by Sipo.