The pair tickled each other’s bellies in the Dáil, leaving hacks green about the gills 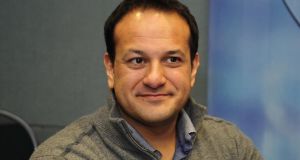 Leo Varadkar: loves a good compliment and got far too many from Gerry Adams and Bríd Smith. Photograph: Aidan Crawley

There was a serious outbreak of sweetness and light in the Dáil yesterday. People felt sick.

“The nausea was coming at me in waves,” gasped a whey-faced lobby correspondent as he lurched from the press gallery. “I feel weak.”

Leo and Gerry were the worst. Then Bríd Smith got in on the act. Even Willie O’Dea temporarily succumbed. They must have put something in the water. Perhaps the Taoiseach was just pleased that Gerry Adams was back and he didn’t have to face Mary Lou McDonald for two weeks running.

Whatever the reason, the pair of them tickled each other’s bellies during Leaders’ Questions and didn’t care who was watching. We’ll just leave that image there. You’re welcome.

The Taoiseach is a sucker for a compliment

All around, TDs gurgled and giggled with the loveliness of it all. It started when the Sinn Féin leader raised a beef about South American beef. The EU has offered to buy 70,000 tons of it as part of a trade deal now under negotiation and Irish farmers are not one bit happy.

Gerry reminded the Taoiseach that “in a recent video message you said that you were very much in favour” of the deal because “free trade makes everyone better off – creates jobs and create revenues”.

One can just imagine Adams waiting patiently on Friday evenings for Leo’s video to ping into his inbox before devouring the content.

The Taoiseach is a sucker for a compliment. “I’m glad that you’re watching my video messages,” he simpered, all of a dither. “They do seem to be having some traction anyway, at least in terms of getting accurate messages across – not just to the general public, but also to opponents.”

Which was a nice little dig at journalists who don’t always represent the gospel according to Leo with sufficient reverence, accuracy or suspension of critical faculties.

Following this initial episode of smarm, normal service was resumed with the Taoiseach’s obligatory swipe at the Shinners. “Sinn Féin really has to decide whether it’s a Eurosceptic party or not. It’s just an impossible contradiction – that you say you don’t want Northern Ireland to leave the European Union, that you’re against Brexit, and yet you consistently oppose what is fundamentally at the heart of the European Union, which is economic integration, free trade agreements with the other parts of the world and a single market and a customs union.”

But everyone knows the answer to that particular conundrum, having it heard it many, many times.

A point repeated, as expected, by Gerry in his reply. But not before he outsmarmed Varadkar – a far cry from a week ago, when Leo and Mary Lou indulged in yet another session of argy-bargy on the chamber floor.

“Let me assure you, Taoiseach, that I am an avid watcher of your videos.”

Which only goes to prove there is such a thing as self-administered punishment beatings. Either that or he was telling fibs.

“I think you could relax a wee bit in terms of your delivery, but so far, so good. You’re doing not so bad. I would commend Twitter to you as well as a means of communications with the masses,” deadpanned Gerry, as they fell around the place on the Sinn Féin benches and Leo beamed from ear to ear.

Of course, it’s only good manners to repay a compliment.

“I think Deputy Adams will be delighted to know that I’m also an avid follower of his tweets,” came the response, triggering a flood of Fianna Fáil taunts about pilates and teddy bears and other aspects of the strange Adams Twitter persona.

“There’s a coalition on the way,” shouted the party’s finance spokesman, Michael McGrath, a quiet type who normally doesn’t shout during exchanges. “This is a love-in.”

It must be the impending budget which had him so frisky. A week to go and there was scarcely a mention of it in the Dáil. No wonder Fianna Fáil was in such good humour.

The love-in turned into a full blown barforama by the time we got to Bríd Smith and questions on promised legislation. The Solidarity-People Before Profit TD wants the Taoiseach to do all he can to ensure the referendum to repeal the Eight Amendment takes place next May or a subsequent time when students are not away on summer working holidays.

She started her contribution with a bit of flattery.

“Even somebody as well-known and as media-savvy and as dynamic as yourself could easily have been missed at the massive demonstration for choice that took place in Dublin last Saturday,” began Bríd as Leo smiled happily.

“But among the tens of thousands of people were thousands of young students who were very concerned, and queried a lot of TDs who were there, about the timing of the referendum next year, and who would like to see it happen during the academic year rather than on the proposed date of June 8th that you have mooted.”

Could he do his best to ensure that the vote was held in May when they were still in the country? He said he would.

Mattie McGrath, clearly unsympathetic to such a suggestion, interjected. “They can vote if they come back.”

Leo went all giggly again. “I have to say, I like the new charm offensive from Deputy Smith. She called me well-known, media savvy and dynamic and I don’t think I’ve received such praise from the far left before.”

He’d written down the words and all.

When will we reach the nirvana set out on page 83 of the programme for Government?

Bríd made a hasty dash to retrieve her street cred. “I was only slaggin’. It’s not a charm offensive.”

Willie O’Dea pretended to be miffed. “I was about to launch a charm offensive but somebody beat me to it, obviously.”

Willie shrugged. “Well, the document says we will.”

Brian Stanley says he has nothing to apologise for over 2017 tweet 12:44
Record €389 million in social welfare Christmas bonus to be paid next week 11:53
McEntee wants to change law on naming child crime victims ‘as quickly as possible’ 11:40
Dublin Bus starts new 24-hour bus route between Ongar and UCD 10:15
€10.7 million-winning Lotto ticket sold in Co Cork 10:10