The European Commission president, Jean-Claude Juncker, has suggested new rules will be proposed in 2018 to ensure that the online sector in Europe pays its fair share of taxes. Video: Reuters 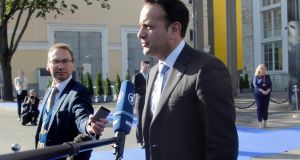 Taoiseach Leo Varadkar arrives for the Tallinn Digital Summit in Tallinn, Estonia. “If we want to foster innovation, the solution is not more taxes and more regulation, it’s actually the opposite.” Photograph: Valda Kalnina/EPA

EU leaders have resumed their political arm-twisting of Ireland to soften this country’s opposition to corporate tax harmonisation.

At the informal EU digital summit in Tallinn, Estonia over the last two days, various leaders insisted harmonisation will have to be addressed, echoing the speech by France’s president Emmanuel Macron last week. Ireland opposes plans to harmonise corporate tax, fearing they could lower the amount of tax collected here and potentially threaten inward investment.

Taoiseach Leo Varadkar gave a strong defence of low taxation and light regulation of the digital sector, an industry where many key EU players have their European base in Ireland . But, speaking at the final press conference, EU commission president Jean-Claude Juncker also addressed the related issue of a common tax base.

He specifically insisted tax should be levied where wealth is created and not where notional corporate headquarters are located. “Tax has to be paid where it is due, whether online or offline,” he said. The big member states want the major digital players to pay more tax in their bigger markets, threatening to divert revenue away from Ireland.

Ireland’s defence of its position was complicated yesterday when figures from the Comptroller and Auditor General showed 13 of Ireland’s top 100 companies pay an effective rate of tax of just 1 per cent. That is well below the State’s headline rate of 12.5 per cent, and reflects the impact of tax credits and reliefs available to companies.

The report also pointed out, however, that France, with the second-highest statutory rate at 38 per cent, had the lowest effective rate at just 0.4 per cent.

Ireland’s estimated effective rate of corporation tax was 12.4 per cent, just 0.1 per cent below the statutory rate. Even that, however, is too low for Ireland’s EU partners.

The corporation tax issue and the related issue of taxation of digital companies have acquired a new political salience in the EU in the last few weeks. Finance ministers have the issue firmly on their agenda again, with another debate due in December.

The European Commission’s proposals on the corporate tax base are wending their way through the system, and several leaders, most notably France’s president Macron and Germany’s chancellor Angela Merkel, have demanded action.

Dr Merkel backed Mr Macron’s speech over the issue and said it would certainly be an issue in the government coalition-building discussions she is embarking upon in Germany following the country’s recent elections.

Speaking at the final summit press conference, Mr Macron reiterated his demand. “Today the market is dysfunctional. It is not normal that companies make excessive profits and pay nothing in taxes. [The tax] is backed by 19 nations, which shows a real dynamic.”

Defending Ireland’s position at the summit on Thursday, the Taoiseach said: “The point that I made to European leaders was that if we want to foster innovation, and Europe to become a digital leader, the solution is not more taxes and more regulation, it’s actually the opposite.”

The Taoiseach is understood personally to be deeply opposed to dropping the Irish veto on taxation, but is said to be aware of a new dynamic in the EU with the looming departure of the UK, the union’s strongest supporter of taxation remaining a national prerogative.

On the one hand Ireland is looking for strong support from other member states over the effect of Brexit. On the other, it is resisting what many see as basic community solidarity by undermining the tax base of fellow member states with “overgenerous” tax provisions for companies.

Mr Varadkar said on Friday that the Irish position is still backed by the Nordic countries and the Benelux nations. Last night, however, Belgian prime minister Louis Michel rowed in firmly behind France. “I am not naive, I know that some European nations are reticent. Because, now, within a short timeframe, it profits them, but it is a short-term vision. If we need a future strategy, we need to look at more harmonisation.”