Taoiseach rules out referendum on ownership of water system

Any chance of water being privatised is ‘impossible and absurd’, Leo Varadkar tells Dáil 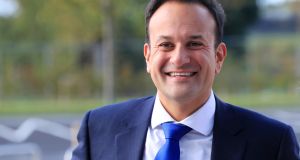 The Taoiseach told TD Joan Collins in there was no chance of the water system being privatised because it requires a subvention of €1 billion just to exist. Photograph: Collins Dublin

Taoiseach Leo Varadkar has ruled out a referendum on ownership of the public water system. He said any urgency for such a poll was gone.

“Privatising our public water services is like suggesting that somebody might want to privatise our national schools. It is impossible and absurd.”

The Taoiseach told Independents4Change TD Joan Collins in the Dáil that there was no chance of the system being privatised because it requires a subvention of €1 billion just to exist.

“Who is going to buy that? Nobody is,” he said.

He could not see how a referendum on water “would make a blind bit of difference because Irish Water is quite simply not a commercial entity and there is no possibility of it being privatised”.

The Taoiseach has already listed seven referendums he would like to take place including one on abortion, on reducing the waiting time for a divorce from four to two years, on whether the role of the woman in the home should be defined in the Constitution and on whether blasphemy should still be considered an offence.

“I would like to prioritise referendums over the next number of years that actually make a difference and might actually change something,” Mr Varadkar said.

Ms Collins noted that while the Taoiseach was saying a referendum to stop privatisation was not urgent, the issue of charging for excessive water use was on Fine Gael’s agenda in the Water Services Bill.

She added that the Bill also gives the Minister the right to reduce the limit for excessive water use in five years’ time.

Ms Collins introduced legislation last November, to allow for a referendum which would enshrine ownership and management of the public water system in the Constitution.

The legislation passed second stage and has been “sitting in scrutiny for a year now while the Minister responsible waits for advice from the Attorney General”, she said.

The Dublin South-Central TD believed there was widespread support for such a referendum, noting that then minister for local government Simon Coveney expressed support to current Minister Eoghan Murphy “indicated informally to me that he would be in favour of such a referendum”.

She added that the expert group on water charges included a recommendation for a referendum in its report and the Oireachtas committee on the future funding of domestic water charges also supported a poll.

Ms Collins said the Attorney General had considerable time to consider the Bill and one of the main factors for opposition to water charges “was the belief that paying for water would eventually lead to privatisation in the future”.

And it was “really crucial that this country enshrines in our Constitution the right to a public water system for future generations”.

Mr Varadkar said he disagreed with her analysis and insisted “there are no plans and no realistic possibility of there being any privatisation of public water services in the future”.

He said he would speaking to the Attorney General about it in the coming weeks and “see where he is with it”.

But he reiterated: “There are not plans and no realistic possibility of there being any privatisation of public water services in the future.”