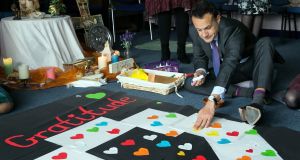 It doesn’t take long for a general election to succumb to the lure of the quick fix. Manifestos and policy papers are boring. Issues equal hard work. The numbers wreck your head.

All it takes is that gateway whiff of headline, a dangled hint of scandal, one tempting chance to temporarily escape the grinding realities of housing and health, climate change, crime rates, tax, pension payments, poverty, pundits banging on about a grand coalition.

And suddenly the drugs are impossible to resist.

Does anyone really give a flying fumbally whether Leo Varadkar smoked, popped, snorted, swallowed, imbibed or sniffed?

Does anyone really care if the Taoiseach, when a Fine Gael brat about town, “did a bit” of cannabis in his college years?

That’s what he told Hot Press magazine in 2011. He was also asked if he experimented with ecstasy or any other illegal drugs as a teen. “Not since I’ve held elected office anyway. I’ve been extremely law-abiding since I’ve been elected to politics” was his reply.

As this only happened a couple of decades ago, clearly the man is a menace to society. On Thursday the media had to do all in its power to unmask him, and all those other colleagues running for high office (and leading opposition politicians) who may have been helpless dopeheads in their formative years.

The whole sordid picture blew up during the television debate between the Taoiseach and the Fianna Fáil leader on Wednesday night, when Virgin Media’s moderator Pat Kenny asked if they had ever taken illegal drugs.

Sure, you only had to look at the big druggie heads on pair of them.

Never, replied Micheál Martin, omitting to mention he once mainlined two double espressos in a pizza joint in Ballincollig, and has been living with the shame ever since.

After a painfully long pause – you could have driven a snowplough through the silence – Leo stumbled out an answer citing his Hot Press interview. “Yes… but it was obviously a long time ago.”

And so illegal drug-use was suddenly the burning issue – in the national interest, obviously.

The people who do such valuable but often thankless work in the addiction and homeless services much have been delighted to learn this. Finally, some assistance and recognition.

The pressing questions from Day 10 and the main campaign events for the two men vying to be Taoiseach: Leo – when did you stop taking drugs? What exactly did you take? How much? What are you hiding? Micheál, will you condemn this man who could become Castleknock’s answer to El Chappo if allowed back into power? Richard Bruton, did you ever take illegal drugs?

No, seriously. Richard Bruton. This is madness. The man makes marmalade (which is probably the name for some form of hallucinogenic, so he’d want to watch himself too)

The Fianna Fáil leader was out early at a press opportunity in Fumbally Lane in Dublin 8. Hipster heaven, where they knit their own sourdough in the local cafes and ferment anything that isn’t nailed down.

Varadkar was scheduled to be out on the trail even earlier, but an event in Santry was cancelled at short notice. No explanation was given, but apparently the Taoiseach had a bit of a dicky tummy and his handlers didn’t want him getting sick on any babies.

Either that or the drugs.

Naturally, Micheál was asked about the Taoiseach’s stuttery answer because this is a very serious election. He didn’t play ball.

“I’m not going to get involved in that. I’m not going down that road. It’s an issue he dealt with last night. As far as I’m concerned there are wider issues, to be fair.”

The Fianna Fáil leader did his lopsided scuttle along the Dublin cobbles for the cameras before roundly rejecting the Taoiseach’s offer of a grand coalition between Fianna Fáil and Fine Gael should there be no other viable option.

As he spoke wisps of vapour uncurled from a flue in the stone wall behind him. In no time, he was enveloped in a cloud of smoke. “Is that Leo?” he quipped, quick off the mark.

It was a good line. But the Taoiseach wasn’t behind the wall having a sneaky spliff, and Micheál was being enveloped by hot air, which is karma of sorts for a politician.

Before he went canvassing around the artisan cottages in Blackpitts and Warrenmount, he met Séan and Darragh Óg McShea, candidate Catherine Ardagh’s four-week-old twins. With their party pedigree they happily posed for the cameras – their mother is Fianna Fáil’s outgoing leader in the Seanad, their father Darragh works in party headquarters and their late granddad Seán was a longtime TD in the Dublin South Central constituency.

Across the city in Castleknock Community College the Taoiseach was back in business and launching Fine Gael’s online safety policy with Communications Minister Bruton and local candidate Emer Currie.

Not that it mattered as the drugs had taken hold and the hacks could think of little else.

Leo referred them back to his answer the night before. “I’m not going to go into any more detail. I’m conscious that I’m the Taoiseach of the country. To a certain extent I’m a little bit of a role model...”

He didn’t want to say anything that might give young people ideas or appear to promote drug-use.

Other issues were also explored. Mere fripperies – stuff like the economy, going mad and making promises to the electorate, pension entitlements, crime in Drogheda.

Then it was back to serious stuff: Richard Bruton, have you taken any illegal drugs, and if so what did you take?

Richard (67) looked delighted to be asked. In his days, he reflected, alcohol was the issue. The other wasn’t such a problem in his younger days.

Leo was urged again to “clarify” whether he took other drugs. “The answer is no, but I really don’t want to get into any more detail on this.”

A hopeful soul ventured “have you ever taken cocaine?”

And so it went until he escaped into the school to meet members of the diversity group in the meditation room. They were reflecting on gratitude. Candles burned in the half-light, and pupils sat on the floor around a large paper heart, filling it with paper hearts on which they had written the thing for which they were most grateful.

The Taoiseach sat with them. These are the things politicians have to do. He took a yellow paper heart and wrote “friends” on it. Friends are important, he told the group. Cherish them. He has some very special friends, but sometimes with his job it’s hard to make time to meet them. He sounded sad.

It was all a little awkward. Leo tried hard to make light conversation. Earlier, echoing remarks during the debate, he said apologetically that his straight talking may sometimes make him seem insensitive. But that’s his personality. Leo, Micheál, Mary Lou, Brendan, Eamon, Richard, Róisín, Catherine and the rest of them. All different personalities, all decent people.

We noticed the Taoiseach has acquired a few grey hairs.

Politics is a tough game.