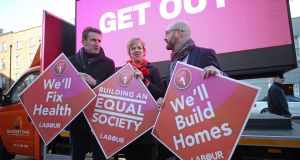 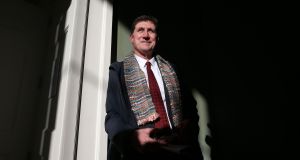 With the big guns still slugging it out over who will win the dubious right to attempt to govern, the smaller parties returned yesterday to their place of ultimate inspiration to wrap up their campaigns.

TDs from the Labour Party, the Social Democrats and Solidarity/People Before Profit delivered their messages from outside the gates of Leinster House, all hoping to walk back through them again after the election with renewed vigour and enhanced mandates.

While the Soc Dems are in with a chance of picking up a few extra seats, the other two are facing a far less certain outcome. All three are victims of the all-consuming battle between Fine Gael and Fianna Fáil over who can be the most hoity-toity when it comes to dealing with a resurgent but highly controversial Sinn Féin.

Up the road from the hopeful also-rans, the Greens held their final press conference in the headquarters of the Irish Georgian Society on South William Street. There was some confusion when the notice went out, as this was also the location of Fine Gael’s national campaign headquarters.

Where were the Greens going to be? In the basement? Above in the attic, indulging in strange pre-election coalition with the least attractive of two prospective government suitors? Did they not read the opinion polls?

But no. Eamon Ryan and his colleagues were gathered in the same elegant room which served as Fine Gael’s conference centre throughout the campaign. It seems the party cleared out of the building the night before, leaving nothing behind.

Not as much as a leaflet. Not a trace of A Future to Look Forward to.

Of course, Fine Gael would have booked the venue with specific dates in mind. The campaign on its penultimate day went outside Dublin with the Taoiseach and sundry Ministers throwing the kitchen sink at Co Carlow in a last-ditch effort to save the seat of local deputy Pat Deering. The Georgian townhouse was surplus to requirements.

But with all the FG paraphernalia suddenly gone, it looked like the party had done a moonlit flit in the face of falling support. Most unfortunate.

“We have given it our all,” said Ryan, who would dearly love to return to the Dáil with a team of 15 deputies.

Because of their strong showing in the local and European elections, the Greens were early front-runners in the race to hold the balance of power. But domestic concerns elbowed out the global. Climate change has not really figured as an election issue, but Ryan believes this will be “the climate change election” and they will confound the commentariat and have a breakthrough moment.

“We will no longer be a small party.”

The Octagonal Room looked very bare and very green in the absence of all the FG promotional banners and backdrops and literature. The high walls were painted in a shade of heritage green, the posters around the top table were bright green and everyone had lurid green keep-cups in front of them bearing the message “Think Green. Drink Green”.

So if the party has a good election and Ryan lands his fantastic 15, presumably they’ll be getting mouldy in headquarters on the crème de menthe.

The upshot of this overuse of one particular colour had a curious effect on the pallor of the three TDs (Ryan, Martin and recent Fingal byelection winner, Joe O’Brien) and two candidates (Peter Kavanagh, Dublin Mid-West; and Sean McCabe, Meath East) facing the media. The reflection caused by the TV lights didn’t help, but they all looked distinctly green around the gills.

The party leader did an interview with Radio Kerry before the final press conference. He has high hopes for their candidate in the Kingdom, Cleo Murphy, as he does for all of their “Wild Atlantic Women” running in the West of Ireland. “I’ll probably be shot for saying that.”

He says it’s looking likely that the last seat will be a fight between Murphy and Danny Healy-Rae. “Our first ever Green Party councillor was elected in Kerry. People forget that. Cleo versus Danny? She has a great chance there.”

If the numbers are good, how does Ryan, a former minister for communications, fancy the prospect of becoming tánaiste? “The greatest cure for ambition is having been in the middle of it before. It kind of washes it out of you.”

Get out and vote

Back outside Leinster House, two of Labour’s brightest prospects for seats were urging people to get out and vote tomorrow. Outgoing Senators Ged Nash (Drogheda) and Aodhán Ó Ríordáin (Dublin Bay North) were being very cautious about predicting outcomes.

Ó Ríordáin said he got a haircut because voters kept mistaking him for Eamon Ryan. With outgoing TDs Finian McGrath and Tommy Broughan calling it a day and announcing their retirements, he knows he will never get a better chance of making a winning return to the Dáil.

Having worked his socks off in the constituency, he says if he doesn’t succeed this time, “I may as well throw my hat at it.”

Nash, meanwhile, has just completed his second course of antibiotics having been laid low by the flu. He was holding one of those diamond-shaped election posters which are popular with candidates.

“Diamonds are forever. Or until the next election – April,” he half-joked. Inside Leinster House, nobody is betting on the next administration lasting any decent length of time.

Before the Labour people rolled up at the gates, Solidarity/People Before Profit TDs made their final pitch. Richard Boyd-Barrett, Gino Kenny, Paul Murphy and Bríd Smith (plus her gorgeous border collie) urged voters to “break the FF/FG cycle”.

RBB declared “a political earthquake is under way” and the two biggest parties are on the fault line. There is a real opportunity for voters to choose a left government for the first time. “Keep left, ” he urged, for a different sort of cycle.

In the afternoon, Catherine Murphy and Róisín Shortall of the Social Democrats turned up at the gates for a final twirl on Kildare Street with Dublin Central prospect Gary Gannon.

Their closing press conference is in Bray this morning. The co-leaders will be delighted to see the end of this campaign, if only so they can start wearing coats and accessories which aren’t in the Soc Dem signature colour purple.

And now just one day to go.