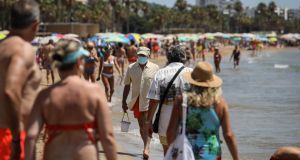 Spain is bracing itself for a disastrous tourism season as foreign travellers are being warned away from the country due to its recent outbreaks of coronavirus.

The British government’s two-week quarantine for people entering the UK from Spain, announced just hours before its implementation at midnight on Saturday, has left tens of thousands of holidaymakers in Spain facing the prospect of self-isolation on their return home, as well as deterring many potential visitors.

The UK, which provides nearly a quarter of Spain’s foreign visitors and is its single biggest tourist market, has also advised against travelling to the country.

The move came as Spain has registered an increase in coronavirus infections, leading to the health ministry acknowledging that the country might be seeing the beginning of a second wave of the pandemic.

Toni Mayor, head of the HOSBEC hotel association in the Valencia region, said the UK’s measure was “a massive blow” to Spain’s tourism sector, which has already been heavily affected by Covid-19.

“Although [reservations] were much lower than what would be normal at this time of year, we were hoping that they would start getting back to normal as we moved into September and October,” he said, explaining that this now looks less likely.

Socialist prime minister Pedro Sánchez described the UK’s move as “disproportionate”. His government hopes to secure exemptions from the quarantine for areas of the country which have lower infection rates and which traditionally receive high numbers of British tourists.

“Take the case of the Canary Islands, the Balearic Islands, the regions of Valencia and Andalusia, which, I insist, have a cumulative incidence of the virus that is lower than that registered right now in the United Kingdom,” Mr Sánchez said in an interview with Spanish television. “In epidemiological terms it would be safer to be in those destinations than in the UK.”

In addition to the UK’s new quarantine, the French and German governments have advised their citizens against travelling to certain areas of northeastern Spain that they deem high risk.

Belgium has banned travel to similar areas, and Norway has introduced a quarantine for people arriving from the country.

Spain registered 905 new infections over the previous 24 hours on Tuesday, compared to 855 the previous day. The health ministry says 60 per cent of cases are concentrated in the northeastern regions of Catalonia and Aragón.

Spain lifted its national lockdown in late June, but since then there have been numerous outbreaks, causing some areas of the country to reintroduce restrictions.

Face masks are compulsory in public places across almost the whole of Spain, and last weekend the government of Catalonia closed down all nightclubs in the region in an effort to prevent contagion among young people.

“We want to give a message of relative normality,” the foreign minister of Catalonia, Bernat Solé, told The Irish Times. “It’s true that we have outbreaks, but those outbreaks are under control and we are working to ensure that and to guarantee people’s safety in the rest of [Catalonia].”