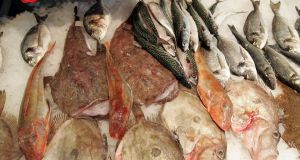 Minister for the Marine Michael Creed has said he is not proposing any tie-up of the fishing fleet despite industry figures reporting that the coronavirus outbreak has had a devastating impact on the sector. File photograph: Alan Betson/The Irish Times.

Minister for the Marine Michael Creed has said he is not proposing any tie-up of the fishing fleet despite industry figures reporting that the coronavirus outbreak has had a devastating impact on the sector.

Mr Creed held a teleconference with fishing industry figures on Friday, with representatives of the off-shore fleet, inshore fleet and processors participating.

The Minister said it was evident that the challenges facing the industry were enormous.

“It is very clear that, as with many other sectors, the fisheries sector is facing very difficult times as its traditional markets both in Asia and now in Europe have been effectively closed,” he said.

“The bad weather earlier in the year has resulted in lower than normal catches and therefore both the crew and vessel owners were already in a disadvantaged position.”

The meeting occurred following the possibility of fishing being suspended in the south and west from this weekend as a result of market collapse.

Ahead of Friday’s talks, John Nolan, general manager of Castletownbere Fishermen’s Co-op, told The Irish Times that the Covid-19 outbreak was having an unprecedented impact and fish markets were closing down all over Europe.

Mr Nolan, who has been involved in the industry for 37 years, said he had never seen anything like the current crisis in terms of the pace at which it developed.

He said the Castletownbere co-op produces €65 million worth of fish annually, with some €60 million of this exported to continental Europe.

“We have 64 boats fishing out of Castletownbere - some 400 people are employed on boats and we have another 120 on shore in our operation but then you have haulage companies and others dependent on the industry,” he said.

“We sell about €20 million worth of produce, mainly prawns, to Italy - that market is closed since the country went into lockdown while we sell another €20 million into Spain, fish like monkfish, megrim, black sole and witches.

“And we sell about €10 million worth of produce into France - ray, white Pollock, ling, whiting, haddock, John Dory, Turbot, red mullet - but the markets in France have closed as well as the price there dropped.”

Mr Nolan said he hoped that some support might be forthcoming from the Government and the European Union as Irish boats tie up to try and get through the current crisis, which could continue for several months.

“It’s a question of getting to know the market in the months ahead- we don’t want to be landing fish and then having to dump but people will need food so we’re hoping there will be a market for fish again - we just don’t know when.”

Mr Creed said his main priority was to find solutions that would allow fishing to continue and to maintain the availabilty of what he said was an important source of food.

He said he and the representatives had examined measures to see if they could bring more whitefish to the Irish market and the potential for temporary storage of fish. He said he had also asked the European Commission to consider the question of EU aid to operators to cease fishing on a temporary basis.

He said the main focus at this point was “to work to continue to support the supply of food.  In line with this, normal service is continuing at the six State-owned Fishery Harbour Centres at Castletownbere, Dunmore East, Howth, Killybegs, Dingle and Rossaveal.