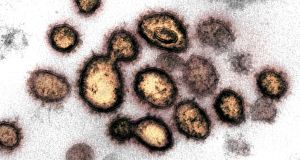 An electron microscope image shows the virus that causes Covid-19. More people in Ireland have contracted coronavirus in the community than as a result of foreign travel, the latest figures show. Photograph: NIAID-RML/Reuters.

More people in Ireland have contracted coronavirus in the community than as a result of foreign travel, the latest figures show.

A total of 137 community transmission cases have been recorded, according to an analysis of confirmed cases, with 132 infections linked to foreign travel.

Seventy-three people were infected with Covid-19 due to contact with a confirmed case, while 96 remain “under investigation”.

The figures emerged as the department announced that 126 new cases of coronavirus were reported by the National Public Health Emergency Team (NPHET) on Friday evening, slightly lower than the previous day.

There are now 683 confirmed coronavirus cases in the State, and three people have died. An analysis of the causes of the 683 cases has not yet been completed.

Monaghan remains the only county without confirmed case, according to the department’s chief medical officer Dr Tony Holohan.

People aged over 65 account for 17 per cent of cases, and 29 per cent of the total number hospitalised.

Of the notified cases, 55 per cent involve men and there are 27 reported clusters involving 142 cases.

The median age of patients is 44 years, and 32 per cent of those who have fallen ill with the virus have been hospitalised. Twelve patients have had to be admitted to intensive care.

The department said 114 healthcare workers have contracted the virus, with 36 of these cases related to foreign travel.

Dublin has the highest number of cases, 51 per cent of the total, followed by Cork (15 per cent) and Limerick and Wicklow (3 per cent each).

Dr Holohan said it was too early to say whether the social distancing measures, which involve people being asked to stay 2m away from others, introduced last week were working.

While the Taoiseach has forecast Ireland may have 15,000 cases by the end of the month, Dr Holohan said this was based on the numbers showing “unmitigated growth” and he was hoping to see “some impact” from the restrictions introduced last week.

With the number of cases currently growing by an average of one-third per day, he said he would be “pleased” to see this rate of growth fall to 15 per cent daily.

Dr Holohan said Ireland remained in the delay phase, though elements of the strategy for containment, delay and mitigation were being deployed at the same time. He said there was no evidence to indicate that people returning from the Cheltenham horseracing festival had been a significant source of infections.

Of the three reported deaths, he said two patients had underlying health conditions and there was no report of an underlying issue with the third person.

Meanwhile, schools in Northern Ireland are to be repurposed as facilities to care for the children of key workers during the outbreak.

First Minister Arlene Foster said on Friday evening that “the educational work that goes on in schools has come to an end” but they were “a good place” to provide free childcare for workers in the NHS and other key areas.

Key workers include those employed in health and social care and other frontline positions, as well as roles deemed essential to public life or to the provision of essential goods and services.

The Department of Education is to publish guidance for schools after principals called for clarity on how this proposal would work.

Nine new cases of coronavirus, also known as Covid-19, were identified in the North on Friday, bringing the number of confirmed cases to 86. One person has died as a result of the pandemic.

Employees in Northern Ireland who have been laid off because of coronavirus will benefit from a commitment by the UK government to pay 80 per cent of wages for employees not working, up to £2,500 per month.

All cafes, pubs, bars and restaurants in the North will also close following an announcement by UK prime minister Boris Johnson, though many such premises have already shut down voluntarily.

Asked about the UK government’s decision to order the closure of restaurants, Dr Holohan said this had been considered. However, he said the NPHET was happy for resturants to stay open if they can adapt by, for example, enforcing social distancing or providing takeaway food only.

Regarding advice for families in relation to Mother’s Day, which is on Sunday, Dr Holohan said that while he understood it was a challenge for society, observing social distancing rules was extremely important.

Dáil marks 25th anniversary of Srebrenica massacre 15:52
Garda detective sent forward for trial on charges including threat to kill ex-wife 15:43
Six counties register no coronavirus case over past week 15:26
First ever woman president of an Irish university appointed at University of Limerick 14:58
Varadkar accused of naivety over ‘Covid penalty’ on mortgage holders 14:26

1 US supreme court rules prosecutors can obtain Donald Trump’s financial records
2 Mother and five children sleeping in car while seeking accommodation
3 Donald Trump is an amateur populist – the real trouble is yet to come
4 Six counties register no coronavirus case over past week
5 Covid-19: Small minority of pubs putting health of customers and staff ‘at risk’
Real news has value SUBSCRIBE