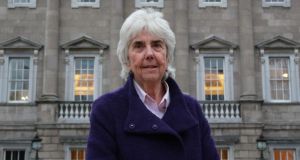 Renewing her call for a ban on coursing, TD Maureen O’Sullivan insisted it was not a sport. Photograph: Nick Bradshaw

Animal rights campaigner and TD Maureen O’Sullivan has attacked the Government’s enforcement of regulation on hare coursing and said the “wonderful” legislation was not working.

Ms O’Sullivan, who has repeatedly raised the issue in the Dáil, said Ireland was now one of only three European Union member states along with Spain and Portugal to still allow coursing.

The practice has been made illegal in Britain since 2004 and Northern Ireland followed suit in 2011. Coursing involves usually greyhounds chasing hares by sight rather than scent, overtaking and then turning them.

Ms O’Sullivan introduced legislation in 2015 to ban coursing but it was defeated in the Dáil.

Renewing her call for a ban on coursing, Ms O’Sullivan insisted it was not a sport. “Hurling, camogie, basketball, rugby and soccer are sports. There is no glossing over the cruelty involved in live hare coursing,” she said.

Minister for Agriculture Michael Creed, who has staunchly defended coursing, said it had the overwhelming support of the Dáil.

However, Ms O’Sullivan said a ban would ensue if political parties allowed their members a free vote. She said the Government’s regulation of coursing events was not working and people attending such meetings “see hares being terrorised” by greyhounds.

Mr Creed rejected her criticism and said coursing was “highly regulated and much changed since the position a number of years ago”.

He said his department devoted considerable resources to protect animal welfare and noted anyone breaking the existing laws on coursing could face fines of up to €250,000 with potential prison terms of up to five years with fixed-penalty fines for lesser offences.

He said he had launched an animal welfare draft strategy in September which has gone to public consultation and the responses “have been very positive”.

The Minister pointed out that “greyhounds are muzzled now so that there is no slaughter of hares as may have previously been the case” and he highlighted the reforming 2013 Animal Health and Welfare Act which “specifies that the hare must have a reasonable chance of escape”.

But Ms O’Sullivan said: “I’m tired of being told about the wonderful legislation. While it is wonderful in theory, there are many examples in which it does not work.”

She said there was evidence from events in Co Limerick which showed that “muzzling and other rules do not adequately protect the hare”.

The animals were “terrorised as they run frantically around a field. They are hit hard by the dogs and sent tumbling through the air. The hares run in circles and sometimes leap over the dogs to try and escape.”

Raising the issue in the Dáil last week, she said that if drag hare coursing could not be considered, which worked in other countries, then she “can only conclude that it is the cruelty in the sport that attracts people”.

Mr Creed described her remarks as a “slur” on people who attend coursing meets. He said many people involved in organising events “do much that is positive in breeding hares and protecting the species”.