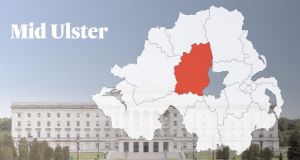 Mr Buchanan (DUP) ended with 4,566 votes without reaching the quota to take the final sixth seat, and Ian McCrea had 4,405 votes.

Ulster Unionist Sandra Overend was earlier elected at the ninth count in Mid-Ulster.

The Deputy First Minister was elected in Mid-Ulster in 1998 but switched constituencies this year to run in his home constituency of Foyle.

Any fears that the loss of such a high-profile candidate would hit their vote were quickly discounted as all three Sinn Féin candidates romped home in the first count in Ballymena’s Seven Towers Leisure Centre on Friday.

Veteran SDLP politician Patsy McGlone came second in the poll, as four of the constituency’s six seats were quickly snapped up in the first count.

Amidst joyous Sinn Féin scenes, poll-topper Mr Milne told The Irish Times: “I’m delighted personally but it is a team effort and we are delighted our three candidates have been elected. The people of Mid-Ulster have spoken and I thank the people for doing that.

“Our top priority is, as always, to create jobs and improve the economy. We also want to move the political process forward.”

“So I look forward to being by a lot more women before the end of the day.”

“The party will decide how we move forward and what departments we will take. For me it’s not about a position, it’s about strong representation, about delivery as Irish republicans and that’s what my priority will be.”

Linda Dillon said: “I feel very privileged and honoured to have been voted in in Mid-Ulster.

“I don’t see myself as filling Martin’s shoes necessarily, but delighted that party made that move and that it pays off for us in Foyle in terms of Martin getting the third seat.

“Martin’s always been a great advocate for people coming through, particularly women, so he will be very proud that a woman has taken this seat.”

The SDLP’s Patsy McGlone said although the turnout reduced by 5 per cent from the last elections the party’s percentage share had gone up.

He said: “To be elected with a surplus on the first count is very heartening. “The constituency work, health issues, housing issues, education, planning that’s the type of stuff that gets you re-elected and that’s where those first preferences were coming from right along.

“You don’t want to be a face, you want to be someone who’s there for people when they need you. Priority is to get stuck back into the work and continue doing what I have done for a number of years, continue with a good service to the electorate.”

There has been much talk in the constituency of disquiet in the DUP.

Unlike in other constituencies, the DUP posters that appeared in Mid-Ulster did not feature the two candidates’ names or faces, and did not advise the electorate of the order to vote.

It was reported that the local association deselected the sitting MLA Ian McCrea – son of former Mid-Ulster MP Rev William McCrea – but the DUP leadership then reintroduced him as a candidate, but did not remove Keith Buchanan from the ticket.

The UV’s Hannah Loughrin was eliminated following the eighth count in the constituency.

Hugh Scullion of the Workers’ Party was eliminated at the seventh count.

Néidín Hendron of the Alliance Party was excluded at the sixth count.

Alan Day of Ukip was excluded at stage three. The biggest beneficiary of his vote transfers was Ms Loughrin.

Ms Loughrin and Mr Scullion had been the two main beneficiaries in the distribution of the surplus votes of poll-topper Ian Milne of Sinn Féin.

The turnout percentage of voters in the Mid-Ulster constituency has dropped dramatically this time around.

As has been the case since 1998, Sinn Féin comfortably took half the seats available in the last Assembly election in 2011 – with the other three divided between the DUP, SDLP and UUP.

In the 2011 Assembly election, Deputy First Minister Mr McGuinness, Francie Molloy and Ms O’Neill won seats for Sinn Féin, while Ian McCrea was elected for the DUP, Patsy McGlone for the SDLP and Sandra Overend for the Ulster Unionists.