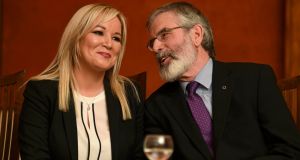 Sinn Féin’s Michelle O’Neill with Gerry Adams during a news conference announcing her as the replacement for Martin McGuinness in the upcoming elections, in Belfast, Northern Ireland. Photograph: Clodagh Kilcoyne/Reuters 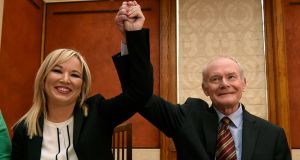 Sinn Féin’s Michelle O’Neill with Martin McGuinness after she was announced as his replacement. Photograph: Clodagh Kilcoyne/Reuters

In recent days, after the elevation of Michelle O’Neill as Sinn Féin’s leader in Northern Ireland, party officials set up a series of one-to-one interviews with her so that reporters could get a measure of the woman – but not too much of a measure.

The Irish Times got 16 minutes 35 seconds with her, although the Clonoe, Co Tyrone woman’s rapid-fire speech means that she packs in more words per minute than any other politician at Stormont.

O’Neill laughs at the commentary about that: “I am regularly told off for it; I am working on slowing down,” she says, comfortably.

Indeed, she is working on it, since it was noticeable how much she attempted to slow down when she stood in the Long Gallery of Parliament Buildings on Monday at her formal inauguration alongside Gerry Adams, Martin McGuinness, Mary Lou McDonald and others.

However, perhaps the SF apparatchiks should leave her alone, and not cramp her style. And she has style. There’s an easy warmth and a quiet vivaciousness about O’Neill that will make her popular outside her native Tyrone with the Sinn Féin grassroots, who do not know her so well.

If it was not for politics, she believes she would have been a chef: “I love to cook,” she says, as she recommends “pollan [white fish] from Lough Neagh fried in butter” as a simple and delicious meal. She also enjoys walking, “the gym whenever I can”, and “switching off” with a novel at night, although in a hurried interview she cannot think of any favourite writers.

Married to Paddy O’Neill, she has two grown-up children, Saoirse (23) and Ryan (19). The big influence on her life was her late father Brendan Doris, a former IRA prisoner who became a Sinn Féin councillor. He died of a heart attack aged just 54. She was elected to his former seat on Dungannon and South Tyrone Borough Council in 2005.

“He showed tremendous leadership in the community. So he has certainly helped shape who I am today. He was a very relaxed person. He never got over-excited about anything. I think I have certainly got a lot of his characteristics.”

People have been asking why the relatively little-known 40-year-old O’Neill and not, say, some of the more veteran Sinn Féin figures in Northern Ireland, such as Conor Murphy or John O’Dowd, has emerged as the leader.

“I have a track record,” says O’Neill simply. Indeed, she does. First as a councillor in Tyrone and an Assembly adviser to MP and former Mid-Ulster MLA Francie Molloy; then as an MLA and later minister of agriculture and, now, Minister for Health.

She has been on the Sinn Féin fast track. The manner of her anointment to replace Martin McGuinness illustrates how Sinn Féin does business differently to other parties, not just in Northern Ireland, but in the Republic, too.

It was unlike the way in which Leo Varadkar, Simon Coveney and Frances Fitzgerald had to slug it out month after month to gain the support of the Fine Gael parliamentary party, councillors and grassroots for the party leadership.

Last weekend, The Irish Times asked a Sinn Féin Oireachtas member: “I hear the ardchomhairle has chosen a successor to Martin McGuinness?” The Sinn Féiner laughed, replying: “That decision was made by two or three people. The ardchomhairle was consulted after the fact.”

Instead, O’Neill was the chosen one and it is reasonable to suggest that the choosing mainly was done by Gerry Adams and Martin McGuinness, even if Adams went to a lot of trouble to deny that.

For years it seemed that former Newry and Armagh MP, former Sinn Féin minister and current MLA Conor Murphy was being prepared for the leadership in the North. But in an almost casual way he was excised from the script.

It could be because he has an IRA past; jailed in 1982 for five years for IRA membership and possession of explosives. O’Neill has no such history.

Or perhaps Murphy’s star waned because a Protestant man won £150,000 (€176,170) in a religious discrimination case against Stormont’s Department of Regional Development when he was in charge of it.

Given the current climate in Northern Ireland and the inevitable need to find some solution to restore Stormont, no matter how long it takes, Sinn Féin leadership may simply not have wanted the past to be raised constantly.

Upper Bann MLA John O’Dowd was also viewed as a contender for a time. He was, after all, an impressive former minister of education and even stood in as deputy first minister in 2011 when McGuinness ran for the Irish presidency.

It may all be down to Adams, McGuinness, McDonald and a few other behind-the-scenes Sinn Féin politburo chiefs deciding that, in the face of an election, O’Neill has more engaging personal qualities than Murphy or O’Dowd, and will work better with the public.

A woman leader, particularly in an election that is already being pitched as “Arlene versus Michelle”, may have also been a factor. At the Clonoe homecoming for O’Neill on Wednesday night Adams said she and Foster could be characterised as “The Chuckle Sisters”, a play on how McGuinness and Ian Paisley were “The Chuckle Brothers”.

And perhaps, despite the absence of what passes for normal party democracy, it may be the right decision. After her appointment the DUP put up a picture online, of her in the breast pocket of Adams. But it didn’t ruffle O’Neill who exudes an inner confidence. “That was very petty,” she says. “I will not be detracted by nonsense like that.”

When asked about the IRA campaign of violence she is careful, not disavowing the organisation but portraying herself as representing a real break with the past: “I regret the conflict happened. I regret that for everybody. When Gerry and Martin spoke on Monday they talked about generational change. I see it as my generation’s responsibility to help heal the wounds of the past.”

But was the IRA campaign justified? “I don’t think it is helpful to go into the politics of condemnation. I have a job to do and the job I want to be concerned with is the job of leadership, showing leadership in terms of reconciliation, genuine meaningful reconciliation and healing the hurt of the past.”

She will be pressed on this issue during the election but her stance so far seems safe and wise.

Sinn Féin, she knows, is in a good position going into the campaign. “I am picking up on energy. I am picking up people have had enough of the DUP’s arrogance and their lack of respect.”

This conversation is taking place in Parliament Buildings. On a better day it would have been further down the hill in Stormont Castle, where but for the current crisis she would already have been deputy first minister.

Could she see herself in the castle with Arlene Foster after the election? “I have always had a grand working relationship with her, so . . . if she is serious about wanting to be in these institutions, if she wants Stormont to work, if she wants to deliver for all citizens, then I will work with her.”

O’Neill says she will lead Sinn Féin in a campaign fought on three key issues: “equality, mutual respect and parity of esteem”.

In politics personality as well as policy is important, and she has personality. Over the 16 minutes 35 seconds, however, it is difficult to detect if she has a particular philosophy or vision that would define her as different to Adams-McGuinness, as one has quit and the other plans to leave the central political stage. That will take time to figure out. But as far as she is concerned the DUP can say what they like, she is her own woman. “I have a job of work to do. I am a leader.”