Tipperary TD’s filings to Revenue in 2007 facilitated declaration of untaxed £248,624 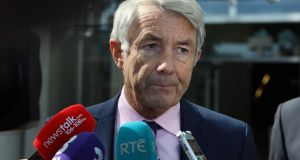 The tax filings that led to Michael Lowry’s conviction last week ensured he did not leave himself exposed to much more serious criminal charges.

The making of the filings in 2007 allowed the Independent TD from Tipperary to declare to the Revenue income he should have declared in 2002, without telling the Revenue in 2007 the income had been received years earlier.

If he had told the Revenue in 2007 the income belonged to 2002, it would have immediately become part of the Moriarty tribunal’s inquiries.

On the other hand, if he had left the income undeclared, he would have run a very serious risk of it being discovered and the Revenue bringing a criminal case in which they would almost certainly, should he have been prosecuted, have sought a custodial sentence.

Lowry has said that the initial failure to pay tax on £248,624 (€280,605) his refrigeration company received in 2002 was due to an oversight. He rectified the matter when he instructed that the income be declared in his company’s 2006 accounts.

It was how this was done that led to last week’s convictions. Lowry was fined and banned from being a company director for three years. His counsel, when pleading for leniency, said what was involved was a “botched repair job”.

The £248,624 was money Lowry’s company, Garuda, was owed by a Finnish company called Norpe. Lowry asked Norpe to pay the money to an entity in the Isle of Man called the Glebe Trust, which is associated with the Northern Ireland land agent, Kevin Phelan. That is what happened, but it left an outstanding tax debt for Garuda/Lowry.

At the time – 2002 – Lowry was the focus of one of the most intense Revenue investigations in the history of the State.

The Revenue case was not settled until 2007. The £1.4 million settlement was agreed without the Revenue learning about the 2002 payment to Phelan.

Phelan was a central figure in the so-called “money trail” parts of the Moriarty tribunal. The tribunal was told by Lowry a separate payment of £67,000 he made to Phelan in 2002 was his only payment to Phelan.

The payment, the tribunal were told, was in settlement of fees Phelan was claiming for land deals in England that the tribunal eventually decided connected Lowry to businessman Denis O’Brien.

The tribunal concluded that the primary purpose of the payment was to ensure Phelan did not undermine false evidence that had been given to the tribunal about the land deals. Lowry disputes these findings.

If Lowry had declared the 2002 payment to Glebe/Phelan during the Revenue investigation, the tribunal would have immediately been informed.

On the other hand, if Lowry had completed his torturous engagement with the Revenue, while leaving the State authority in the dark about a substantial, and very controversial payment, and the Revenue later found out about the matter, it would have had serious consequences.

The Revenue eventually found out in 2013 about the Norpe payment.

During 2004, against the backdrop of explosive developments in the Moriarty tribunal, Phelan and Lowry discussed over the phone what Phelan might or might not tell the tribunal.

Phelan secretly taped the conversation, and in 2013 a copy of the transcript was published in the Sunday Independent.

This in turn sparked the Revenue inquiry that culminated in last week’s convictions.

In the taped conversation, Lowry pleaded with Phelan not to tell the tribunal about the payment. “If that comes out I’m f**king ruined. I’m bankrupt.”