‘Such bigotry was not part of King William’s mindset,’ DUP leader argues 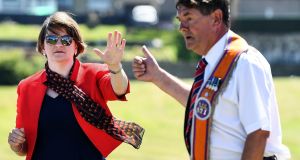 DUP leader Arlene Foster has appealed to Orange Order members to reject bigotry and intolerance as she addressed a march in the Scottish town of Cowdenbeath.

Speaking at the County Grand Lodge of the East of Scotland’s Annual Boyne Demonstration on Saturday, Ms Foster used William of Orange’s victory in 1690 as a lesson to modernise unionism.

“This country needs to be a shared place where people are able to live free from intolerance and hatred,” she said.

“Such bigotry was not part of King William’s mindset and it should not be part of ours,” the DUP leader continued, before adding: “Nor directed towards us either,” in a possible reference to anti-Orange Order graffiti and posters that appeared in the town overnight, including graffiti mocking the 66 victims of the Ibrox disaster in 1971.

Other speeches from the stage risked undermining Ms Foster’s calls for a more modern, tolerant Orange Order. One Orangeman referred to James Connolly, a signatory of the 1916 Proclamation and a leader of the Easter Rising, as a “terrorist”, before shouting “No surrender”.

Another, wearing a sash and a chaplain’s collar, said: “There are many in this town who are not only enemies of this institution, but who are enemies of Christ.”

Following her attendance last week at the GAA Ulster final in Clones, Co Monaghan, and an LGBT event at Stormont, Ms Foster’s planned appearance in Scotland had provoked intense interest.

A DUP spokesperson said: “It’s a much more routine event than it has been viewed.There’s no link or relationship between ourselves and the Orange institution, other than quite a number of DUP representatives are members at home, and there are quite strong links between Northern Ireland and Scotland.”

Prof Graham Walker of Queen’s University Belfast said her attendance could be read as an act of solidarity with Scottish unionists, or as a statement by the Orange Order of renewed political relevance.

“The Orange Order want to say to people in Scotland: you’re not going to get rid of us. We’re a player. And here we have the leader of a political party who holds the balance of power at Westminster,” he said.

Prof Tom Devine of the University of Edinburgh said the Orange Order was an import from Ireland. “When Irish immigration started in the 1790s to Scotland, into the mid-19th century, about a quarter to a third of all Irish immigrants to Scotland … were actually Protestants rather than Catholic.”

Standing outside Cowdenbeath’s only Catholic Church, Fr Dominic Clovis expressed bafflement at the way this historical entanglement between Ireland and Scotland was expressed. Fr Dominic, originally from London, has been in Scotland for a year. “I don’t understand. My dad’s from a Caribbean country, and there is no sectarianism there. There isn’t such a divide.”

Back in the field, several unofficial stalls sold loyalist and Rangers memorabilia, including a maroon T-shirt with the Parachute Regiment crest and the words “No apology. No surrender”, a reference to Bloody Sunday in Derry in 1972.

Peter Smith (68), a souvenir seller at a nearby stall, was sceptical of Ms Foster’s call for an end to bigotry. “That will never happen” in Northern Ireland, he said. In Scotland, however, he saw no problems between Catholics and Protestants: “Scotland’s fine. It’s just a load of banter. Northern Ireland’s a different kettle of fish.”

Not everyone sees it as banter, and Ms Foster’s attendance placed pressure on organisers to ensure no scenes of drunkenness or sectarian singing. More than 100 police officers lined the route as Orange lodges and 40 bands marched through the town for two hours.

One banner struck a very different tone in Cowdenbeath on Saturday. In a quiet act of protest, Cara Hopkins (28) hung a sheet painted with the words “Love not hate” from the balcony of her home as the march passed.

“I feel angry. Really angry. Everyone has the right to protest and the right to march and express themselves. But it’s disrupting the whole town, and no one was consulted about it,” Ms Hopkins said.

“This will be portrayed by the media as loads of support for the Orange lodge. No, there’s loads of curious five-year-olds and tired mums who are bringing them out to look at the ‘pretty colours’. It’s not a fair representation.”