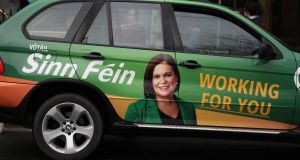 Mary Lou McDonald is not in a position yet to credibly claim she can lead a government, but a strong showing on February 8th should earn her the right to participate in one. Photograph: Nick Bradshaw/The Irish Times.

Despite the loud protests in recent days over Mary Lou McDonald’s exclusion from the debate between Leo Varadkar and Micheál Martin, the Sinn Féin leader is not competing to be taoiseach after the general election.

Sinn Féin is standing 42 candidates across 39 constituencies, and would need all but one of these to get elected in order to be the dominant party in a post-election majority coalition government - and even then it would only be by a whisker.

The magic number in the 33rd Dáil is 80, as a majority government must be able to command that level of support to take power. Failing that, a confidence and supply agreement would be required for other parties to underpin a Sinn Féin-led minority government, and the chances of that happening are zero.

McDonald knows this herself and, when asked on numerous occasions on Tuesday if she can be taoiseach, she declined to give an emphatic “yes”.

Up to this point, McDonald has emphasised Sinn Féin’s desire to be in government rather than ambition to lead one.

Varadkar and Martin are offering themselves as potential taoisigh and McDonald, perhaps conscious of how Labour’s “Gilmore for Taoiseach” push eventually fell well short in 2011, clearly does not feel she is in a position where she can do so.

Her arguments now are more likely about participation in government rather than a pitch to lead the country and it is here that she is on much stronger ground.

The Dublin Central TD has correctly said that those who vote for Sinn Féin have as much right to expect that their votes will have a bearing on a potential future government as those who support Fine Gael, Fianna Fáil, Labour, the Greens and anyone else in the last Dáil.

The figures in this week’s Irish Times/Ipsos MRBI poll - Fianna Fáil on 25 per cent, Fine Gael on 23 and Sinn Féin on 21 - are unlikely to be repeated on polling day. Past experience suggests Sinn Féin’s support will fall below the opinion polls when the actual votes are counted.

But ignoring a fifth of people who, at the very least, express a willingness to vote for McDonald’s party is not democratically sustainable, particularly when Fine Gael and Fianna Fáil are only a nose ahead of Sinn Féin.

McDonald is not in a position yet to credibly claim she can lead a government, but a strong showing on February 8th should earn her the right to participate in one.