Mixed reaction from Irish language groups to commitment to legislation 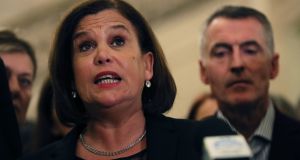 Among the provisions of the New Decade, New Approach document, which forms the basis of the restoration of the Northern Executive, is a commitment to legislation which officially recognises the status of the Irish language in Northern Ireland.

It was, said Ms McDonald, “a very significant and historic day, it’s a red-letter day, not just for An Gaeilge but for recognition of Irish identity and for taking a stand and [for] inclusivity right across our society.”

DUP leader Arlene Foster said: “People will note that whilst there is a recognition of the facilitation of Irish language, there is also very much a recognition of those of us who are Ulster British and live here in Northern Ireland as well, and there is [sic] many mechanisms to strengthen the union.”

In the text published by the Irish and British governments late on Thursday, there is a provision for an Irish language commissioner and an office of identity and cultural expression, which the text says will “promote cultural pluralism and respect for diversity”.

The Assembly’s standing orders will also be amended to allow Assembly business to be conducted through Irish, and a simultaneous translation service will be introduced.

The same measures will also be implemented in regard to Ulster Scots, which will also have its own commissioner.

Three of the North’s five main parties – the DUP, Sinn Féin and the SDLP – had by Friday night agreed to go back into the Executive, paving the way for a sitting of the Assembly on Saturday.

“The complete omission of visibility and signage is hugely frustrating and will undoubtedly be a source of tension, and will expose major fault-lines on contested cases of signage in the coming period,” he said.

The campaign group An Dream Dearg said that while the deal represented “a historic development for the Irish language community” it fell far short of their campaign objectives.

Ms McDonald said to Irish language activists that they should “take heart” and she expected, and indeed encouraged them, to continue to press for further change.

“I think everybody who loves Gaeilge and everybody who embraces diversity and respect across this island should regard this as a positive thing, and of course the converse is nobody should see this as a threat.

The restoration of power-sharing was widely welcomed by business, civic and religious leaders in the North yesterday.

In a joint statement, the leaders of Ireland’s five main churches said the agreement was “ambitious in its content and reflects a balanced accommodation that is focused on the common good”.

This was, they said, “a sign of welcome progress that provides an opportunity for a new start for Northern Ireland’s political institutions and one that can also offer fresh hope”.

The president of the Ulster Farmers’ Union, Ivor Ferguson, said it was “imperative that we use this opportunity to show support to our political leaders”.

The Northern Ireland Chamber of Commerce said that “after three years of paralysis, we now have a workable deal that will allow an Executive to start addressing the problems within our health service and education system”.

The North’s chief constable, Simon Byrne, said there was much in the agreement that was “good for policing”, and welcomed the commitment to increased officer numbers to 7,500.

The representative body the Police Federation said while it welcomed this and other proposals, it continued to have “serious reservations” about legacy proposals.