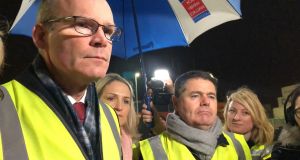 Fine Gael has attacked both Sinn Féin and Fianna Fáil following a poll which showed that the party is in third place just days before the general election.

The Tánaiste Simon Coveney accused Sinn Féin of “feeding and encouraging undercurrents of anger in society.”

The Minister for Finance Paschal Donohoe said Fianna Fáil was rolling out housing promises that were reminiscent of their “greatest flops.”

Mr Coveney did not rule out a grand coalition between Fine Gael and Fianna Fáil.

He also said the Irish public may he fed up of talking about Brexit saying they are “punch-drunk” on the issue but that Ireland does not have the “luxury” of ignoring the topic.

Mr Coveney outlined his “direct appeal to everyone” asking them to consider who they trusted.

“The word change has been ambushed and abused. Voters are being promised levels of spending and policies that would cripple the Irish economy again.

“Populism in the short term with a disregard for future consequence,” he said.

“The brand of politics being practiced by Sinn Féin is built on discontent and division, feeding and encouraging undercurrents of anger in society. There is always a them and us in Sinn Féin politics.

“The line up Irish people against other Irish people. Ask yourself this, has Sinn Féin ever put the country before its own party interests.”

Mr Coveney said there are turbulent months ahead on Brexit.

“Yesterday Boris Johnson put the UK on a collision course with the EU. Mark my words, the weeks ahead are going to be extremely turbulent for Ireland. So when you go to vote ask yourself the question of who do you trust. Do you trust the party that trashed the economy and now claims to be reborn. Do you trust the party who make blatantly irresponsible spending promises.”

“My message is direct. You can trust Fine Gael, vote Fine Gael.

The Minister for Finance Paschal Donohoe said that Sinn Féin’s economic plans were a “con job” and “built on sand.”

He also hit out at Fianna Fáil plans for an SSIA scheme as “populist, reckless and irresponsible.”

Mr Donohoe denied that Fine Gael had been “beaten by populism” in the election.

When will we be able to travel again? ‘October is the new July’