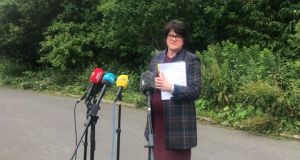 Micheál Martin will make his first visit to Northern Ireland as Taoiseach next Thursday, a week later than originally planned following scheduling difficulties.

Announcing the trip at a press conference on Thursday, the North’s First Minister, Arlene Foster, would not be drawn on the reasons for the delay, saying that she “was not going to get into scheduling”.

“I don’t usually take from the press what is happening, I usually take what’s happening from my private office,” Ms Foster said, adding that she was “very much looking forward” to welcoming the Taoiseach to Northern Ireland.

Senior sources in Belfast said the delay was down to a “cock-up rather than a conspiracy”, and that, while there had been discussions around a potential visit yesterday, this had not been confirmed.

It is understood that while the Deputy First Minister had been notified, the First Minister did not become aware of the potential visit until later, when scheduling issues meant it could not be confirmed for Thursday.

However, it is not regarded as an issue of concern. “Nobody’s getting outraged about it,” said a senior source, with another suggesting that it had been “over-hyped”.

It is not clear if an apology was given by the Taoiseach, but a source suggested it may have been informal rather than formal.

It is understood provisional arrangements were in train for meetings with the Alliance Party and the SDLP, either individually or as part of the Executive, though a senior source within the Ulster Unionist Party said nobody had been in contact with the party and the first they knew of the trip was when they read it in The Irish Times.

However, the source added the party would be “delighted” to see the Taoiseach, “as we always are”.

In Dublin, Government sources declined to comment on the delay in the visit, with Government Buildings keen to play down any division over the timing, though it is understood that significant preparations had been made for the visit earlier this week.

It was agreed between officials in a phone call on Wednesday that the visit would not go ahead this week.

There was no comment on whether an apology had been offered.