Eamonn Mallie: The road I travelled with Martin McGuinness

‘The community I came from was being treated like second and third class citizens... I had a responsibility to fight back’

In an upcoming episode of Eamonn Mallie meets... Martin McGuinness talks about his personal and political life. Video: Irish TV 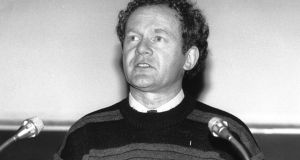 I started reporting in Northern Ireland in 1975. From then onwards the paths of the former IRA commander and deputy first minister Martin McGuinness and myself crossed.

I don’t recall when I first met McGuinness. I always found him constant in temperament, choosing only once to tick me off over my line of questioning during our many professional encounters.

I chose sparingly to engage McGuinness and he appreciated that. He always took and returned my calls.

We didn’t socialise. Contact was always on a professional basis. We had one interest in common: fishing. He loved talking about fishing, particularly in Donegal.

I once told him that my late Mum bought me a Hardy Jet fly rod (the Rolls Royce of rods in those days) for my 21st birthday.

He plagued me over the years to gift it to him if I had no intentions of using it.

Now I regret that I didn’t. He would have made more use of it than I did.

I did my most probing face to face interview with McGuinness for Irish TV in October 2015.

As journalists we were rarely afforded an opportunity to sit down with a republican of his standing for an in depth interview. The archives will bear this out.

In my preparation for my interview with the then deputy first minister I had history on my mind and a sense of where both he and I were in our respective life cycles.

The interview commenced with some enlightenment on how McGuinness ended up being called Martin having been christened James Pacelli...(It transpired he was called Pacelli after Pope Pius X11 and James after his grandfather).

Mystery remains why he was called Martin.

The McGuinness household in Elmwood Street in the Bogside was not a political house.

He told me his parents “were more religious than political”.

“Our house was a house where the Rosary was said every night. We got down on our knees every night of our lives as children,” he said. “My parents were daily communicants. We went to the retreats, mass and all the Observances.”

In a conversation less than two weeks before the 1994 IRA ceasefire I put it to McGuinness that I could not understand, coming from his Catholic background, how anyone could justify the taking of human life in any circumstances.

He took me by surprise with his response. 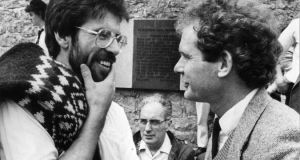 “How many soldiers did you kill?”

I asked does he have sleepless nights reflecting on the taking of human life?

“I mean obviously everybody is accountable for their own actions and everybody has to make judgments based on their own conscience as to whether or not they believe what they are doing is right or wrong,” he said.

“I believed that in a situation where the community that I came from was being treated like second and third class citizens, that I had a responsibility to fight back against it and I don’t apologise to anybody for having done that.

“I think it was the right thing to do,” declared McGuinness.

The Provisional IRA, a book co-authored by Patrick Bishop and myself in 1987, quotes a Royal Marine Major who fought McGuinness on the streets of Derry for months. He spoke of him being “excellent officer material.”

Local Derry women reportedly used to taunt the soldiers on as they patrolled the streets that “McGuinness will be out tonight.” His status as a street fighter went before him.

He told me in the wake of the 1972 IRA secret talks with British cabinet minister William Whitelaw at Cheyne Row on Chelsea Road: “I learned in two hours what Irish Republicans still hadn’t learned - that the British don’t give easily.”

If McGuinness proved ruthless in his dealings with the British being a strong believer in economic targeting, he rarely held back in addressing his own organisation where he felt tactically it was wrong.

Of the 1975 IRA ceasefire he said: “It was the most critical stage of the last 16 years and if changes had not taken place in the short term then the IRA would have been defeated.

Despite McGuinness’s hawkish disposition he was all the time theorising and balancing militancy with politics.

His was the pivotal voice in copper fastening the majority support in the 1986 ard fheis debate which saw the ending of abstentionism to the Oireachtas.

In a charged atmosphere and in an address aimed at traditionalists like Ruairí Ó Brádaigh, who opposed the ending of abstentionism, McGuinness warned: “If you allow yourselves to be led out of this hall today - the only place you will be going is home.”

As far back as November 1999 during the George Mitchell Review into the failure of the IRA to yield up its arsenal of guns and explosives following the signing of the 1998 Good Friday Agreement, McGuinness was plotting the next political move.

My colleague Brian Rowan and I had a conversation with him on the south Armagh border after a republican commemoration about the possibility of the IRA dealing with its arms.

At that time Ulster Unionist leader David Trimble was protesting “no guns no government.”

McGuinness spelled out to us that day “the immediate task is for politics to work" and “up the road if armed groups want to engage in a voluntary gesture...Trimble knows the score. Trimble can walk out but republicans haven’t agreed to everything falling if the IRA don’t deliver.”

The first IRA act of decommissioning took place in 2001.

In his last interview with me McGuinness said: “Everybody, if they are serious about politics and if they are serious about trying to make people’s lives better, has to consistently challenge themselves as political activists about how they can do that and in the run into the late 80s and the early 90s I did read a number of theses that were written by very senior generals in the British Army for various universities in England, and the common theme that ran through all of them was that they all conceded that they couldn’t militarily defeat the IRA.

“And an awful lot of IRA people were very happy about that and an awful lot of Republicans all over the island thought, you know, this was a great thing because what it did do, it showed, if you like, in one regard some sort of respect that they had for the military capabilities of the IRA, but for me it posed a bigger question and the bigger question that it posed for me was well, ‘if that’s what the senior generals in the British Army believe, what do republicans believe about its ability to defeat the British Army?

You know, where we are now is a far better place than where we were 20 years ago

“And if the answer to that was, you know, similar then we were effectively considering a conflict that would go on for many more years.”

The British authorities spotted from early on that ultimately any peace deal would have to have McGuinness at its heart simply because they knew, based on their intelligence, that were he to buy into any deal he could bring the ‘foot soldiers’ with him.

Those senior British officers on the streets of Derry and those who fought side by side with McGuinness knew he would not ask another member of the IRA to do what he would not do himself.

In my last interview with McGuinness, I asked was he at peace with himself?

He replied: “I think the work of the last 20 years has been transformative in terms of both the security and the political situation.

Looking to the future I wondered if the deputy first minister thought much about the possibility of a dissident republican bullet being directed at him.

“I get up in the morning, I go and do my work, I don’t hide, I go to public events. The Peace Process is precious to me. If I worried about that or if I was preoccupied about that I would not go out the door,” he declared.