Varadkar’s approval jumps to 60% as voters show their satisfaction 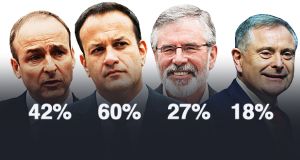 Taoiseach Leo Varadkar has seen his approval rating jump again in the first Irish Times/Ipsos MRBI opinion poll of the new year, while satisfaction with the Government has also increased.

Although support for Fine Gael has fallen back slightly by two points, this comes after a big jump at the end of last year and the party retains a considerable lead over its biggest rival, Fianna Fáil.

Mr Varadkar’s approval rating, up seven points to 60 per cent, is now higher than for any taoiseach since Bertie Ahern in 2007, at the height of the economic boom.

Satisfaction with the Government has risen by three points to 44 per cent, the highest since Fine Gael came to power seven years ago.

The poll was conducted on Monday and Tuesday of this week among a representative sample of 1,200 voters aged 18 and over in face-to-face interviews at 120 sampling points in all constituencies. The margin of error is plus or minus 2.8 per cent.

Undecided voters were at 21 per cent, down two points since the last poll.

The surge in the Taoiseach’s approval rating is the most eye-catching element of the poll, but Ministers will also be heartened by the three-point increase in satisfaction with the Government.

A slightly increased majority of voters (58 per cent) say the country is “generally going in the right direction”, with 34 per cent saying it is going in the wrong direction.

Satisfaction with the three main opposition leaders has declined marginally in each case. There is only a slight decline in Micheál Martin’s approval rating among Fianna Fáil voters, suggesting that although his change of mind on abortion may have been unpopular in some sections of his party, it has not substantially affected him among those intending to vote for the party.

The poll is not wholly good news for the Government, however. The fall in Fine Gael support, albeit marginal, brings to an end an 18-month period in which the party saw its support increase in every poll.

Despite the question of abortion dominating much political debate, the poll shows there has been little impact on party support figures so far.