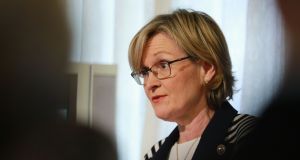 Maireád McGuinness: a rare example of a journalist making a successful career change into politics. File photograph Nick Bradshaw for The Irish Times

Fine Gael MEP Mairead McGuinness, who has been appointed as European commissioner in charge of financial services and financial stability, is a rare example of a journalist making a successful career change into politics.

Born in 1959 in Ardee, Co Louth, Ms McGuinness was the first woman to qualify with a degree in Agriculture Economics from University College Dublin in 1980.

A consummate performer on TV and radio, Ms McGuinness honed her media skills from her previous and varied career as a print and broadcast journalist, which including periods as a researcher on The Late Late Show, a reporter with the Irish Farmers’ Journal and editor of the Irish Independent’s farming supplement.

She gained a higher public profile as a presenter of RTÉ’s Ear to the Ground and hosted one of the station’s early forays into reality TV, Celebrity Farm.

Ms McGuinness still makes frequent TV appearances as her views on major developments within the EU are regularly sought out by international media.

In her first outing as a political candidate, McGuinness topped the poll in the three-seater East constituency for the 2004 elections to the European Parliament.

Her candidacy had sparked some debate within Fine Gael as she was regarded by some as having been parachuted in for her celebrity status by the-then party leader, Enda Kenny, which threatened the single Fine Gael seat in the constituency held by outgoing MEP Avril Doyle. But both women were elected.

Ms McGuinness is seen as ambitious, although her outings in non-European elections have been less successful.

Her attempt at winning a Dáil seat in the 2007 general election ended in failure when she stood for Fine Gael in Louth, coming in fifth in the four-seat constituency without ever threatening Sinn Féin’s Arthur Morgan who took the last seat.

In April 2011, Ms McGuinness signalled she wanted to be her party’s nominee to contest that year’s presidential election following the ending of Mary McAleese’s two terms in office.

However, she was defeated by Gay Mitchell in the final count, although she came in ahead of Pat Cox, a former president of the European Parliament.

She again topped the poll in the Midland/North West constituency in the European elections last year.

The fact that her seat is now regarded to be one of the safest among all Irish MEPs, given the volatile nature of the electorate in European elections and the reduced number of Irish seats in the European Parliament since first being elected, is seen as a testament to her hard work, competent performance and staying in touch with her rural base.

Since being elected a vice-president of the European Parliament in 2014, she is regarded as one of the most senior Irish politicians operating at EU level with a detailed and valuable knowledge of the workings and interactions of the various EU institutions in Strasbourg and Brussels.

In December 2016, Ms McGuinness finished second to Italian MEP and former EU commissioner Antonio Tajani to secure the European People’s Party nomination to contest the election to select a successor to Martin Schulz as president of the European Parliament in December 2016.

McGuinness is married to Tom Duff, and the couple have four children. Her sister Sharon is chief executive of the Health and Safety Authority.