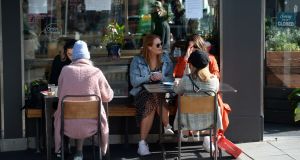 Eating out on Dawson Street, Dublin, on Saturday. Business in shops in city and town centres has collapsed, with a huge drop in footfall. Photograph: Dara Mac Dónaill

Local authorities will be forced to start cutting all services including housing maintenance, roads, lighting and parks services, community grants, festivals and arts supports without significant exchequer investment to cope with the impact of the Covid-19 pandemic.

Austerity measures are likely as city and county councils estimate they will need €300 million for next year and about €190 million in 2022 to maintain services because of the collapse in revenues, with losses this year expected to be €367 million. Local authorities’ spend directly on Covid-19 is expected to be €90 million by year end.

Commercial rates represent about 30 per cent of city and county council income, and the State’s six months’ rates waiver from March is expected to be paid to councils in the next few weeks.

But, according to one source, councils attempting to collect rates for the next six months are “having to walk in the door to businesses in tourism, hospitality, hotels and pubs to collect rates”. That sector pays some €320 million annually in rates.

The Government may offer another six months’ waiver to businesses in Budget 2021, but authorities are hoping the State will also pay 80 per cent of the estimated €367 million in losses as other revenue streams dried up, and share the burden with councils and “keep local services going”.

Business in shops in city and town centres has also collapsed, with a huge drop in footfall and about €80 million in lost parking income, despite some improvement during the summer months. Parking fee income in 2019 was €104 million.

Litter fines, planning fees, income from the awards of licences, property and house rentals and other services account for 27 per cent of income, with expected losses of €78 million.

The issue was raised in the Dáil last week when Minister of State for Local Government Peter Burke acknowledged that local authorities “have seen an absolute collapse in their goods and services income, that rates income and the ability to collect rates will be under significant pressure, and that the Government will do everything we can to support the local authority sector”.

Sinn Féin TD Martin Kenny said that 80 per cent of funding the Government gives to local authorities must be used for items that are already earmarked. He said both Sligo and Leitrim county councils had been unable to pay housing grants because there is no discretionary fund in place and the councils’ income streams had collapsed.

The Dáil also heard that Cork City Council had a budget deficit of €2.5 million, excluding the deficit in rates, while Kerry faces a shortfall of between €13 million and €14 million in next year’s budget. The estimated Covid-19 impact on Mayo in 2021 is €7.2 million.