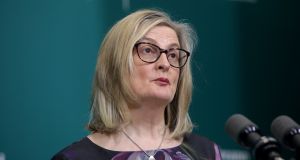 Young people that attended Tuesday’s street party in Limerick have been urged to come forward for Covid-19 tests.

Senior Government official Liz Canavan made the remarks at Wednesday’s Covid-19 briefing where she also insisted young people have shown the can lead the way in adhering to Covid-19 restrictions.

“The first thing I want to say is the majority of young people are doing great. And they have missed out on a lot.”

She added: “If you have slipped up, and you were part of last night’s events the best thing you can do now is come forward for testing if you have any concerns.”

Ms Canavan, the assistant secretary general of the Department of the Taoiseach, said GPs would arrange tests if they have any worries.

Three men were arrested after a “significant” number of gardaí were despatched to the Carysfort Avenue estate at College Court, Castletroy, in response to complaints and following videos emerging on social media of the scenes.

Gardaí said on Wednesday that one of the men had been charged and was due to appear before Limerick District Court on March 22nd.

It includes Alex, a healthy man in his 20s who describes how he coughed up blood after contracting Covid-19 and ended up in ICU where he told a nurse at one point that he wanted to die.

“I was just sick of it,” he said, adding: “I was so sick and so sick mentally as well it just drained my whole system really.”

Ms Canavan said that the stories told by Alex, Jack – a 17-year-old still recovering from the long-term effects of Covid-19 and ICU nurse Susie “hard to watch” but “what it tells us is that no group is invincible”.

Ms Canavan said the fall in Covid-19 cases was slow and steady rather than dramatic.

She said that is “okay so long as we keep going in the right direction, but for now we have to continue to do as well so we have been and maybe improve a little.”

She said that there has been an increase in people moving and warned this can cause a significant increase in the spread of the virus.

Ms Canavan said: “There has been a noticeable increase in workplace retail, and recreation mobility in the last while.”

Data for the week ending the February 26th shows that workplaces, have seen a 14 per cent increase in the last month while retail and recreation is up 4 per cent in the month.

Footfall in Dublin is up 17 per cent on last month which Ms Canavan said was an increase of 547,000 people moving around.

Overall traffic volumes are up 8 per cent on last week, and 9 per cent since last month.

Ms Canavan said: “I cannot emphasise enough that we must all continue to work from home, unless our work is deemed essential work, which requires our physical presence.”

She also said the return to schools was “not a signal to return to work”.

“We also need to stay within our 5km radius, even though it’s difficult.”

“If you’re found to be flouting the restrictions you may be issued a fixed penalty notice.”

She said that to date about 9,800 fines had been issued by gardaí across a range of all Covid-19 breaches.