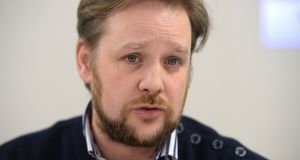 Green Party TD Patrick Costello said there were concerns a referendum may be needed in order to ratify the Comprehensive Economic Trade Agreement (Ceta) between the EU and Canada. File photograph: Dara Mac Dónaill

Tánaiste Leo Varadkar has said that a Green Party TD launching a High Court challenge against Government plans is more serious than voting against the coalition in the Dáil.

The Fine Gael leader made the remarks at a private meeting of his parliamentary party in the wake of Green Party TD Patrick Costello’s legal challenge against the Government’s planned ratification of a controversial international trade agreement, the Comprehensive Economic Trade Agreement (Ceta) between the EU and Canada.

Mr Varadkar told his party he viewed the matter as more serious than a coalition TD voting against the Government.

He said Mr Costello’s suggestion that he has taken the legal challenge in a personal capacity as an individual citizen “doesn’t wash” with him.

Sources at the Fine Gael meeting said Mr Varadkar did not give any indication of what Mr Ryan said during their discussion.

The Irish Times understands that Mr Varadkar has expressed a view in separate communications with colleagues that Mr Costello’s case may be thrown out.

The Green Party previously removed Dáil speaking rights for two months from Minister of State Joe O’Brien and Dublin Central TD Neasa Hourigan after they failed to vote with the Government on a Bill dealing with tenant’s rights last July.

Mr O’Brien abstained from the last vote on the Residential Tenancies and Valuation Bill and Ms Hourigan voted against it.

Mr Costello has launched a High Court challenge against the Government’s planned ratification of a controversial international trade agreement.

Mr Costello said there was a “good case” that a referendum was needed in order to ratify Ceta.

“On Monday, I lodged proceedings in the High Court to seek clarification on who gets to ratify the Comprehensive Economic Trade Agreement, commonly known as Ceta. I had sought the opinion of counsel on the ratification process, in particular the Investor Court System (ICS) element of Ceta, which will come into effect if ratified.”

In a statement, Mr Costello said the investor court system “involves a transfer of sovereignty and of judicial power incompatible with the Constitution”.

“It is of fundamental importance that the members of the Dáil, myself included, who would vote on whether to ratify Ceta know that our votes are constitutional. Only the courts can give us complete certainty on that question.”

The Green Party TD said he has “taken this action as an individual citizen and it is a personal action.”

“The treaty will be going to Oireachtas committees for scrutiny on the question of should we ratify Ceta and what are the consequences of that. This legal challenge will at the same time answer fully the question of how we ratify this – can we do it by Dáil vote or do we need a referendum,” he added.

Elsewhere, the committee on budgetary oversight – chaired by Ms Hourigan – has said that it will refer one of the most controversial aspects of the Ceta deal for analysis on the potential liability to the State arising from it.

The Investor State Court (ISC) replaced the Investor-State Dispute Settlement (ISDS), which enabled overseas investors to resolve disputes via a tribunal. The ISDS was subject to widespread criticism, with critics arguing it favoured corporate rights over sovereign countries’ interests, and the mechanism was abandoned by the European Commission in favour of the ICS during the negotiation of Ceta. However, critics, including Ms Hourigan, say the ICS system is problematic, and sets up courts outside the domestic system.

The committee’s move followed a proposal by Sinn Féin TD Maireád Farrell but nonetheless will be seen as moving in tandem with Mr Costello’s High Court case as Green TDs opposed to the deal seek to frustrate its progress through the Oireachtas.

“The Committee on Budgetary Oversight has agreed to consider the liability to the state of ratifying the establishment of the Investor State Court aspect of the Ceta trade deal. Further consideration of similar dispute mechanisms related to trade agreements may also be included in the sessions,” Ms Hourigan said.

In the Dáil, Taoiseach Micheál Martin said the legal advice he had received was that “the claims that have been made against Ceta are not sustainable”.

He added that there had also been “very clear clarifications brought by the European Court on this issue”.

Social Democrats TD Jennifer Whitmore had asked the Taoiseach “will the Government defend that case?”

Mr Martin told her that Ceta is “absolutely in the interests of” workers, enterprise and “a country that exports the vast, vast majority of goods and services that it produces” He added that as, an exporting country, Ireland was dependent on free trade.

A spokesman for the Green Party said that “this is an individual case taken by Patrick Costello rather than the party. It is the right of any individual to take such a case. The Green Party has sought to deal with this issue through the political system. The matter has been referred to an Oireachtas committee.”

The development is likely to increase tensions in the Green Party about the Ceta deal at time when it looked like a crisis had been averted by a Government decision to refer the matter to the Oireachtas European affairs committee.

The deal was due to be ratified by the Dáil in December. But the vote was postponed over fears that at least two Green TDs would vote against the Government. Since then the smallest of the three Coalition parties has been involved in an intense and divisive internal debate over Ceta. It held a number of web seminars in January. Several prominent councillors and members have resigned from the party in recent weeks over this and other ongoing issues.

The issue was due to come back to the Dáil last month for ratification – 14 other EU states have already ratified the deal.

However, the Government decided that it would be referring the matter to the Oireachtas European affairs committee which will examine the issues involved before a Dáil vote is held.