Leo meets Theresa May: It was never going to be about small talk

British prime minister Theresa May has called for a 'seamless border' between Ireland and the UK as she meets with Taoiseach Leo Varadkar in London. Video: Reuters 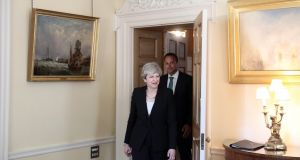 Theresa May and Leo Varadkar arrive for their bi-lateral meeting in Downing Street. Photograph: Simon Dawson/Bloomberg

Leo Varadkar beamed as he walked into the oak-panelled state dining room at 10 Downing Street to face the press with Theresa May.

It was not just his first overseas trip as Taoiseach, but the first time he had set foot in the British prime minister’s residence. “It’s my first time in this building, so there’s a little thrill in it as well. As we spoke on the way in, I was reminded of that famous scene in Love, Actually where Hugh Grant does his dance down the stairs,” he said.

The contrast between the two leaders was cruel – Varadkar full of wide-eyed optimism at the start of his ascendancy, May looking exhausted and hunted as she faces the possibility of being bundled out of Downing Street at any moment.

The prime minister has had a mensis horribilis, starting with the Manchester Arena suicide bombing, the first of three terrorist attacks, and including the fire at Grenfell Tower, where the death toll continues to rise.

She has lost her majority in parliament, her authority over her party and her popularity in the country.

All the Taoiseach has to worry about is Shane Ross and Máire Whelan.

There was some anxiety before the meeting about the fact that neither May nor Varadkar are much good at small talk – she because she can’t, he because he can’t be bothered. But officials said they hit it off well enough, the Taoiseach’s cool indifference chiming more easily with the prime minister’s natural reserve than did the rowdy bonhomie of his predecessor.

Varadkar made no news at the press conference, but he made a good impression, dealing with questions fluently and reasonably straightforwardly. Asked about the DUP’s opposition to marriage equality, he said he had raised it with Arlene Foster and would continue to do so, asserting that it was a matter of when, not if, Northern Ireland would introduce equal marriage rights.

But May needs DUP support, not just for a vote on her legislative agenda next week, but for the next budget.

Varadkar rolled out a line from Winston Churchill about Britain and Ireland walking together “in mutual comprehension and forgiveness”.

Churchill’s more famous quote about Ireland might have been less diplomatic, but more apt.

“The whole map of Europe has been changed,” he said in 1922. “But as the deluge subsides and the waters fall short we see the dreary steeples of Fermanagh and Tyrone emerging once again.”