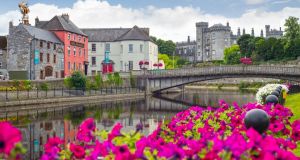 Kilkenny councillors on Friday voted to exclude members of the public and the press from SPC meetings, which formulate policy. Photograph: iStock

There has been a call for a national approach on access to council meetings, after Kilkenny County Council voted to exclude public and press from all of its strategic policy committees (SPCs) .

The National Union of Journalists (NUJ) said media and the public are being excluded from local government and a “national policy” is now needed to ensure transparency.

Councillors on Friday voted to exclude members of the public and the press from SPC meetings, which formulate policy. Up to now media have been welcome to attend and observe meetings of the SPCs.

SPCs exist in every local authority to advise and assist the council in the formulation, development and review of policy. Membership is comprised of elected members, council staff and experts in relevant fields. Policy is formulated in draft form to be then scrutinised and voted on by all councillors.

Currently in Kilkenny there are five SPCs specialising in economic development, infrastructure, housing, environment, and planning and heritage.

At Friday’s inaugural meeting of the new council there was an item to exclude public access to the SPCs. Green Party councillor, Malcolm Noonan, tabled a counter-motion that the media and public should continue to be able to attend.

His motion was defeated 19 votes to five, with no abstentions. Cllrs Noonan, Tomás Breathnach and Denis Hynes (Labour) David Fitzgerald (Fine Gael) and Eugene McGuinness (Independent) voted to allow public access with all Fianna Fáil and most Fine Gael voting to exclude.

Cllr Mary Hilda Cavanagh (Fine Gael) explained her vote was on the grounds that SPCs were “policy driven committees” where members should be “able to speak and ask questions freely.

“Some people can feel inhibited by the presence of the press, when a draft policy is being thought out. When it is brought forward for debate in the full council chamber, that is where the public can examine and debate it too.

“We can review this new policy in a few months but to be honest I never saw any press or public at SPC meetings I’ve attended anyway.” Cllr Cavanagh is an outgoing member of the environment SPC.

Cllr Noonan however described the measure as a “restriction on the press, a restriction on public’s access to information and a hugely retrograde step” pointing out that several local authorities live-stream their SPC meetings.

“These committees are discussing and formulating public policy and making decisions about the how tax payers’ money is to be spent. My experience of the press attending SPCs is that they help inform debate and ultimately make for better policy. This is about transparency, accountability and local democracy.”

He hoped the NUJ would take up the issues and make representations to council management.

Irish Secretary Séamus Dooley, who on Twitter described the decision as “an inauspicious start to a new council”, said the union would not be “singling out Kilkenny council” as this issue went beyond one local authority.

“While there has been an improvement in recent years in media access in local government some councils are now abusing that. The committees should operate in public, much like the Oireachtas Committees at national level.

“If they need to conduct some of their business in private session, as happens at Oireachtas Committees, that is one thing. But the principle must be that they are heard in public.

“We will be calling on our members around the country to report any press restrictions at councils. The committee system has been abused by some councils to the extent now that there needs to be a national policy on this.”

In a report published last year by Transparency International, Transparency, Accountability and Ethics in Local Authorities, Kilkenny County Council was one of the lowest scoring council.

“ Ideally all Council meetings should be webcast.,”it said.