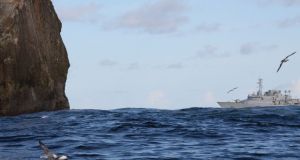 The Scottish government has warned Ireland it will send its fisheries patrol vessels to force Irish fishing boats to leave a 12-mile zone around Rockall, the tiny disputed island 260 miles west of the Co Donegal coast.

In a formal letter of notice, the Scottish external affairs minister Fiona Hyslop has warned the Irish Government that it will deploy its vessels to protect Scottish fishing rights around Rockall.

The Government here, which contests the Scottish claim on Rockall and also the claim of exclusive fishing rights, has condemned the move but on Thursday the Minister for Agriculture and Fisheries Michael Creed briefed fishing industry representatives about the impending Scottish action.

The diplomatic dispute has been festering for months, with the Scottish Government intensifying its complaints to Dublin about what it says is illegal fishing activity by Irish vessels around Rockall.

Last week, Ms Hyslop wrote to the Government to put it on formal notice of the impending enforcement activity, and she spoke to the Tanaiste and Minister for Foreign Affairs Simon Coveney on Thursday.

In a statement this evening, the Irish Government said that its position “has been and remains that the waters around Rockall form part of Union waters under the Common Fisheries Policy, to which the principle of equal access for the vessels of all EU Member States applies. Irish vessels have operated unhindered in the Rockall zone for many decades fishing haddock, squid and other species.”

Mr Coveney said that it was “the longstanding position of the Irish Government is that Irish vessels are entitled to access to Rockall waters.

“We have never recognised UK sovereignty over Rockall and accordingly we have not recognised a territorial sea around it either. We have tried to work positively with the Scottish authorities and to deal with sensitive issues that flow from it in a spirit of kinship and collaboration. We very much regret that matters have reached this point and intend to do everything possible to achieve a satisfactory resolution,” he said.

Mr Creed said he had held a “difficult but necessary meeting today with our fishing industry representatives”.

“I am very disappointed to have had to make them aware of the risk of enforcement action against them for fishing legitimately in the waters around Rockall. The industry representatives understood the situation facing Irish vessels but are justifiably concerned at this action being taken by a fellow Member States where our industries are closely connected,” he said.

In a statement the Scottish government said: “Irish vessels or any non-UK vessels for that matter have never been allowed to fish in this way in the UK’s territorial sea around Rockall and, despite undertaking extensive discussions with the Irish authorities on the matter, it is disappointing that this activity continues.

“There has actually been an increase in that illegal activity and, with the Rockall fishery season nearly upon us, it is our duty and obligation to defend the interests of Scottish fishermen and ensure compliance with international law.

“However, we are in dialogue with Ireland and willing to consider any genuine proposals that means full enforcement action may not be required.”

Rockall is a tiny uninhabitable islet in the North Atlantic, whose ownership has been disputed between Ireland and the UK for decades. However, although the UK has claimed sovereignty, it has never sought to claim the fishing rights now claimed by Scotland.

Fianna Fail marine and fisheries spokesman Pat the Cope Gallagher said fishing restrictions on Rockall were “completely unacceptable”. He said the claim of ownership had never been recognised by any Irish government.

He said there were numerous Donegal vessels fishing off Rockall. “ These are long standing fishing traditions and patterns, which predate any claim by any other jurisdiction of these jointly fished grounds.”

The Co Donegal TD said he would raise it with Taoiseach Leo Varadkar. “The Irish Government needs to step up and defend Irish interests without further delay, and this declaration by the Scottish government must be challenged at the highest level”